A dawn start at Flamborough Head led to disappointment in the drizzle. Conditions for migrant birds looked great - I must have got something wrong! - as the Old Fall Circuit yielded virtually nothing. One Wheatear, a couple of Lesser Redpolls and several Goldcrests was all I could find. Not quite the epic fall that had inspired me to spring out of bed earlier on. There was a surprise in store, however. I decided the fresh northeasterly may offer more value over the sea and news of a White-chinned Petrel off Norfolk confirmed my decision - I grabbed my scope and headed down to the fog station.

Arriving at the seawatching hide, news was surprisingly mediocre, with only a handful of skuas and Sooty Shearwaters moving. 1000 Kittiwakes was impressive though, so I decided to stay a while. A little later, a guy walked up and said he had seen a whale breach - twice! This was interesting; I had never seen a Minke Whale breach although I was aware they did it, but only rarely. This would be cool to see, but as I scanned I feared I had missed my chance. A few tense moments later and the yell of 'Humpback!' came from Andy Malley in the hide - panic!

The whale breached a couple more times, then lay on the surface, smashing one of it's pectoral fins on the surface. It then fluked, dived under before starting a long series of cataclysmic breaches. At one point, it became clear there was a second individual as I saw another whale breach further out very shortly after the first whale had landed. Two Humpbacks! I had always dreamed of seeing this leviathan off the Yorkshire coast, but never expected to see a prolonged display like this. The whale/whales carried on cavorting for the best part of an hour, gradually heading north and further out and as news spread, quite a crowd gathered along the clifftop. Even at a great distance, the immense splash caused by the breaching could be seen easily through bins. The blow was seen frequently, large and bushy, hanging for a few seconds. Absolute scenes! One of the greatest things I have ever seen. 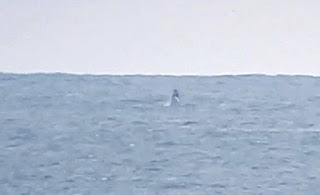 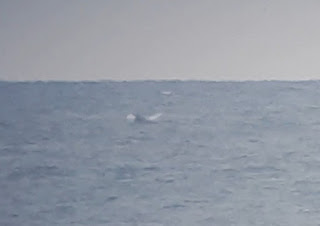 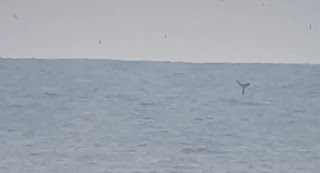 Upper two pics you can see the white pectoral flippers contrasting with the black body as the whale twists over on it's back for maximum splash. The bottom pic shows the whale fluking, whacking it's massive tail on the water.