Dawn found me standing at the top of a wooded riverbank somewhere near Preston, Lancashire, squinting through the branches of the trees lining the River Darwen. As the light increased, a Common Kingfisher whistled as it headed upstream, unseen. But our target had a different call. We strained our ears, and minutes later a dry rattle could clearly be heard from below us: the Belted Kingfisher was still here and awake!

I had picked up Philip from some random car park near Bolton and now we joined a hundred or so birders eager for an early Christmas present, standing at the edge of a muddy field, overlooking the river below. 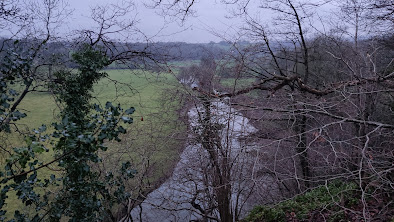 After a few tense moments, both Philip and me saw the unmistakeable bird flap across the river and up into a tree. Sadly, it was now out of sight. Chaotic scenes ensued; only one birder had actually managed to get his scope on the perched bird. Birders scrambled around in the mud trying to get a good angle through the trees and down the slope, which was not easy. The monster kingfisher moved and more birders managed to lock on, but my view was mostly obscured. Fortunately, a couple of kind birders demonstrating fantastic Christmas spirit let me have a look through their scopes - awesome - thanks lads! 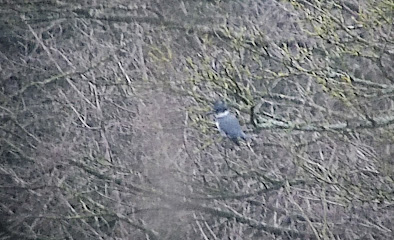 I now had an idea where the bird was and shortly, Philip managed to locate the bird with his bins and after a bit of an explanation about which branches to look through, I managed to get on it. What a cracking bird! All slate-blue and punk. The BK casually sat, surveying the scene from the edge of an oak, occasionally cocking its tail and swivelling its head. The white collar and belly stood out against the dark, woody backdrop. Lovely!

Repaying the kindness shown to me, I gave arriving birders a look through my scope before taking a bit of video and a pic or two. The bird seemed to favour this particular perch as it returned frequently, after dives and sorties up and down the river. By 9am, we decided to make tracks, and slopped off through the mud and the murk, beaming madly. 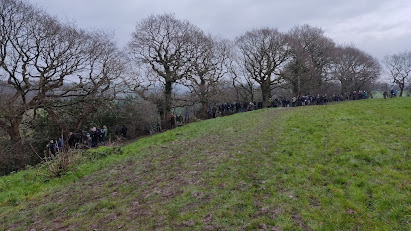 Present since early November, this male Belted Kingfisher had been playing hard to get, evading many twitchers and local birders, for weeks. It has been mobile, being seen along the Ribble the local canal and now the Darwen. Lots of the area is private and difficult to view but in the last couple of days it decided to settle along this quiet stretch of the River Darwen, near Roach Bridge, allowing birders to catch up with it.

Seeing this bird eased the pain of dipping the 2005 bird in Staffordshire. Back then, and once we had realised it was not an April Fool's joke, Mark Hawkes and me discussed going for it that evening after work. I was doubtful that we would get there before the bird went to roost, and so we settled on dawn the next day. Sadly for us, the bird showed until dusk on the Friday and we would have made it. My bad! The following day we waited in vain - the bird had decamped to Yorkshire! We all piled north and missed it again; it had flown off hours before we got there. A couple of days later, the bird was relocated near Aberdeen but I didn't have the chance - or motivation - to go all that way to see it. Apart from a one-day bird on the Scillies last year, this has been the first since. A cracking bird to end what has been a pretty amazing year for rarities in the north of England. Just a shame it was in Lancashire!

We popped into Preston to check on a Ring-billed Gull in the marina, but to no avail. We headed south, I wished Philip Merry Christmas and then headed back east through the worsening weather.