Queen of the Forest

After a couple of weeks of turbulent, often violent weather, the clement embrace of early spring arrived and was most welcome. Frogs spawned in our little pond and Blackbirds, the most heart-melting of resident songsters have joined the growing dawn and dusk choruses; I have seen a bumblebee and my first Celandines.

Yesterday, under clear, bright skies, I led my first Goshawk Tour of the season for Yorkshire Coast Nature.  Having done a recce a couple of weeks ago and with great conditions, I had high hopes that we would be successful. Our tour started with great views of a pair of Common Crossbills feeding on Larch seeds, in the company of Siskins and Goldfinches. It was great to watch the male in the morning sunshine, lighting him up like a fiery candle. 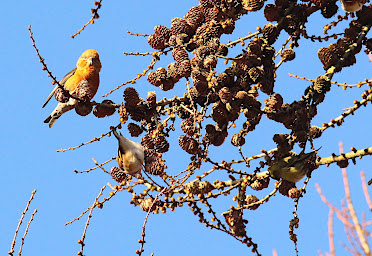 A few moments later and a big pale bird shot across the trail 50 metres in front of us; one of the clients who was ahead of me shouted 'there's one!' and sure enough the ghostly phantom of the forest, a big female Goshawk circled up over the nearby forest, and drifted slowly right overhead. 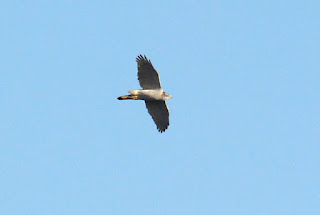 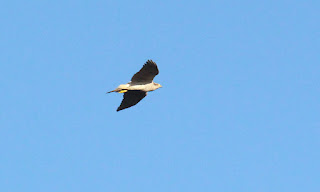 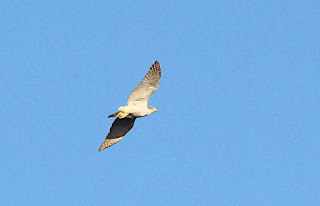 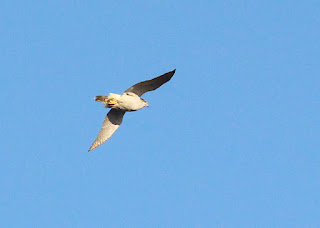 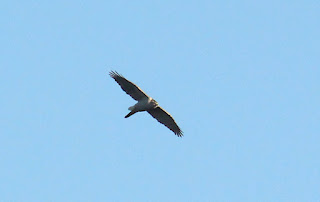 Her tail was tightly closed and her white undertail coverts puffed out like big pantaloons, almost fully encircling her tail. She was so close you could see her tilt her head to look at our little group, huddled below, watching her in awe. This was an incredible start to our tour and as she drifted away, we all beamed with delight. 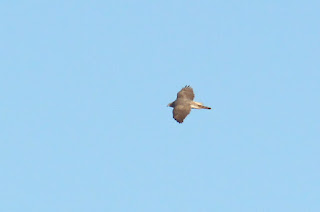 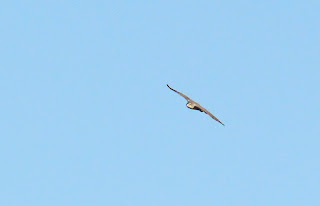 We pressed on to another likely looking spot. Soon, an immature male Gos drifted over, his heavily streaked, buffy underparts giving him quite a different appearance to the Queen of the Forest we'd seen earlier. We picked up another female over the far side of the open area, displaying with typical straight, owl-like wings. The amplitude of her wing strokes became more and more exagerrated and we suddenly noticed another female above her. This seemed to be a territorial skirmish and they briefly came together, talons out-stretched. The display was enough and one of the birds drifted off into the distance, while the other female dropped into the forest. 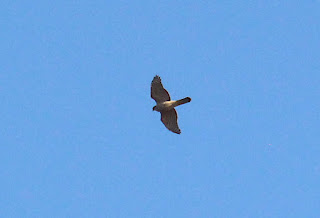 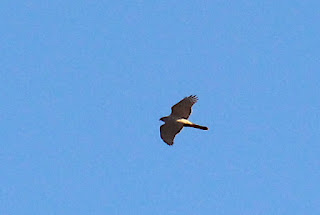 The young lad; remarkable how different this bird looks in these two shots.

Returning to our original location, we picked up the Queen's consort, an adult male, cruising around over the valley. We watched him as he crested the ridge and headed off over the arable lands, flushing large flocks of portly Woodpigeons which had been feeding on the winter wheat. He took a bit of interest and looped back round into the safety of the trees.

It was clearly a good day for Goshawks, with a fresh breeze and warm spring sunshine. The Queen soon reappeared along with her mate and a little later we picked up another male to the north which could have been a different bird. We moved on, seeing another male far to the east of our original location followed by our last bird, probably a female, at the end of the afternoon. I am pretty sure we had eight different individuals, with numerous sightings. Every one was a real thrill, but our first encounter with the Queen of the Forest was truly breathtaking. 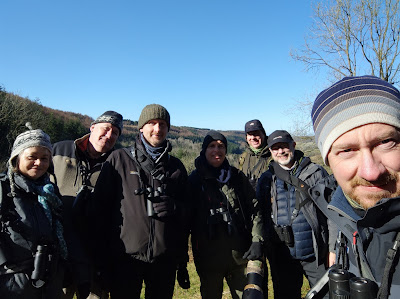