The wind has remained northeast, but with bright blue skies and sunny weather, there has been little to drop migrants in, so the birding has been quite steady. A bit of rain could change everything, but unfortunately, it has been dry for weeks now, so the hordes of Arctic Terns and waders passing over York have remained high up and out of sight. The Whimbrel roost is beginning to build with three on Wednesday night surpassed by 12 last night seen by Duncan.

I spent a few enjoyable hours at Wheldrake yesterday morning, where the presence of a Marsh Harrier had shifted all the ducks out of the emergent vegetation on to the few remaining patches of open water allowing them to be counted. As well as 68 Wigeon, I counted 423 Teal on Swantail, with a further 136 on the Refuge, which seemed a pretty good count. Among the horde, the white eyebrows of two drake Garganey shone out, and one was in the company of a female.

There was still only one Reed Warbler singing on site; it seems the poor weather to the south in Europe is blocking new arrivals.

Bumped into Paz and we had a good chat as we walked back. Right at the last minute, I glanced back over the main meadow and saw the huge shapes of a pair of Cranes, circling over the ings. We watched them cruise around as if they were going to land, but they drifted over the Low Grounds, circled and then headed towards Bank Island. It has been a good spring for Cranes in the LDV but it seems that none are breeding as birds elsewhere in the country have hatched their chicks already. Hopefully they are birds prospecting for next year. 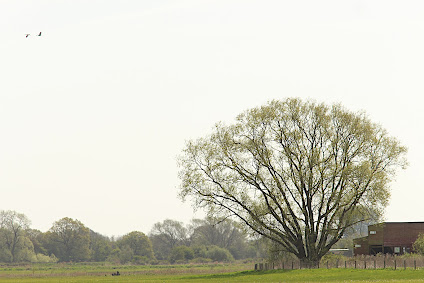 The Cranes passing behind my favourite tree. 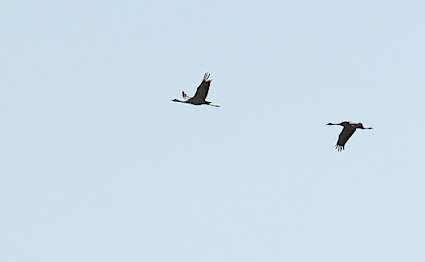 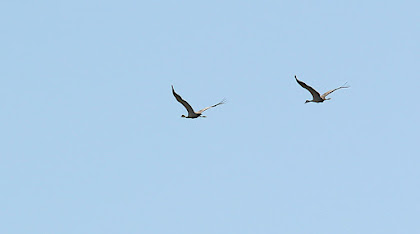 So, all in all, despite the lack of new migrants, not too shabby!

Back home, the Dark-edged Bee-flies were getting amorous in the garden and the Hairy-footed Flower-bees are still hanging out on the Lungwort.