On the way up to Ripon City Wetlands for a site meeting, I stopped by Burlands Flash to see what the heavy showers had dropped in. Four Ringed Plovers were nice, though I was hoping for more.

At the Wetlands, six Avocets and a Greenshank were the only waders noted. Arriving home for a late lunch, my phone rang; it was Andrew Schofield telling me there were two Turnstones on the remnant flash on Acaster Airfield - wow! I turned the kettle off and shot straight down there- lunch would have to be missed. I walked/ran to meet Andrew and was anxious as I could see a Red Kite cruising over the fields near the flash. Eek! Fortunately, the two Turnstones and nine Ringed Plovers were still present when I got there. One of them was a cracker in full breeding plumage, the other a little drabber. After watching them for a few minutes, a Lapwing flew in and chased the Turnstones, which flew off in alarm. They headed off north calling loudly. The afternoon was warming up and I had to get back, so we headed off.

News of a drake Ferruginous Duck at Castle Howard was a bit of a surprise this morning. There had been a one-day bird at Staveley NR a month ago which hadn't been seen since, but as there were no other drakes in the country, this would probably be the same bird. I picked Duncan Bye up after tea and headed over. The showers had subsided for now and we soon found the Fudge loosely hanging out with a dozen Tufted Ducks, catching mayflies from the water surface. A very smart drake, we watched it for half an hour before heading back. Also noted, eight Great Crested Grebes, several Mandarin and Gadwall and four Cormorant nests. This is only the second Fudge I have seen in the York area, the first since the last one here at CHL in 2011. 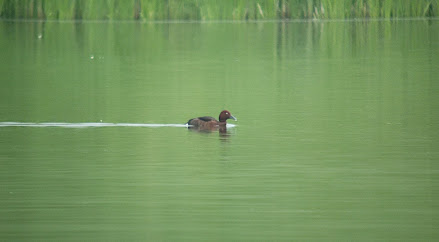 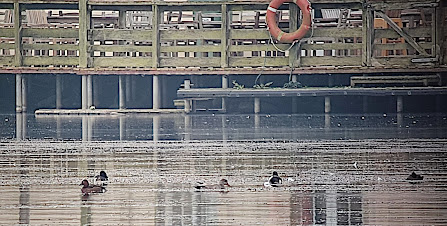