Irish Pelagic #2: The one that almost got away

A few more migrants were present this morning as we birded to the east of the waist before lunch. A Reed Warbler, a scarce bird on Cape Clear, was the highlight, along with plenty of common warblers, Goldcrests, Wheatears and Siskins. Following a fantastic feast at Cotter's Pub, we descended to the boat for our second much-anticipated pelagic trip. Today we went out due south. Common Dolphins were scattered across the inshore feeding, with some large males fooling us into thinking they were another species at first.

After an hour or so of travel, Great, Sooty and Manx Shearwaters began to appear and by mid-afternoon we had come across a couple of large rafts of birds loafing on a mirror-like sea. A number of Euro Storm Petrels were seen, easier to spot over the flat sea. The conditions had really calmed since yesterday giving the ocean a sub-tropical feel. 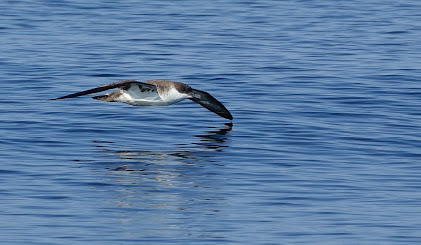 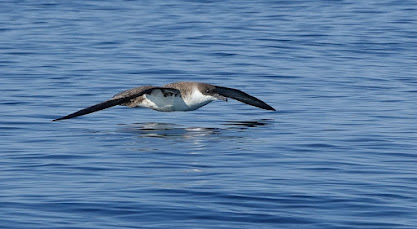 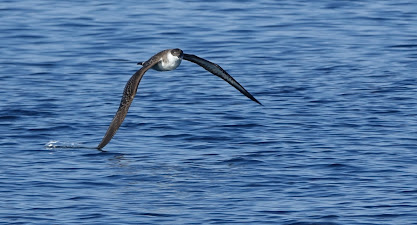 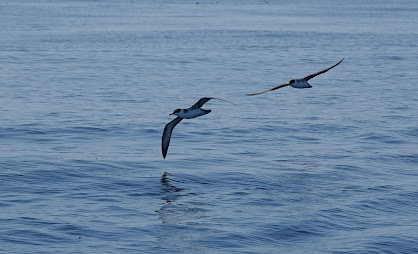 After a while, we parked up near a big raft of shearwaters, to soak up the scene. Paul decided to put some fish oil and scraps in the water to see if we could bring in any petrels. Sure enough, several Storm Petrels buzzed past, though none stayed to feed and didn't approach the boat too closely. A couple of Arctic Skuas chased Kittiwakes but didn't come into the chum slick. After a while, Jane spotted a pair of fins of the starboard bough. Surely a Basking Shark! But no, a surfacing Dolphin allowed a size comparison and it was quite small. Paul confirmed it as a Blue Shark and said it might come into the chum slick. Sure enough, within a few minutes, the shark was below us, cruising slowly through the crystal clear water and nuzzling the chum bucket. What a spectacular fish, the brightest blue on the dorsal side, with amazing, long hydrodynamic pectoral fins on either side. Simply stunning. Another two sharks appeared, one of which was much larger. Meanwhile, the shearwaters paid no attention!

During this spectacle, a Storm Petrel came past quite close. I pointed it out to Adam and Paul and knelt down to get some pics. I didn't look through my bins - big mistake! It did a couple of loops before melting away. I got back to scanning the rafts of shearwaters looking for something unusual.

The following evening, sitting on the plane back to Manchester, I looked through my photos on the back of my Dad's camera. I was pretty shocked to see the photos of 'that' petrel: it had clearly pure dark underwings, projecting feet and a wrap-around white rump! Yikes! This looked great for a Wilson's Petrel. After confirming this with Paul and Team Birdo I then realised I had another photo of the bird showing the upperwing, complete with grey carpal bar. It was a Wilson's! I was delighted to have got these pics or else the bird would have got away unnoticed, but I felt sad that I hadn't looked at it through my bins and got the group on what would have been the rarest bird of the trip. Doh! Well, these things happen if you take the eye off the ball. I spoke to Adam and Paul and they remember seeing the bird, so at least they saw it. 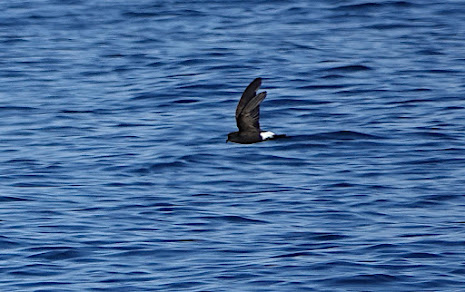 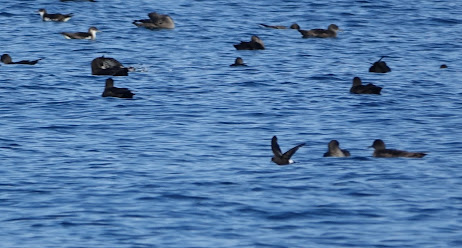 Wilson's Petrel - the one that almost got away
I continued to grill all the shearwater flocks for something rarer, sadly not knowing that the rarest bird had just flown past. It was great birding, but try as I might the Pterodroma was not present. A juvenile Arctic Tern flew past, the only one of the trip. 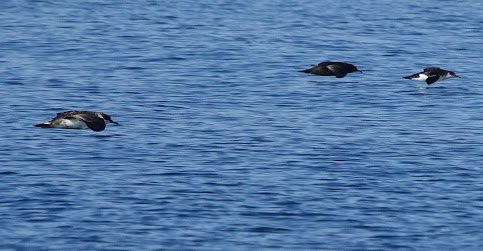 Some of the rafts I looked through. Really big numbers of birds again. Many of the Sooties looked really fat, so the birds must have been feeding really well in the calms seas. Perhaps this was why the chum was not attracting much. Too soon, it was time to head back to the island. What an epic trip again.
at September 23, 2022