By Tuesday last week I was beginning to feel like the media were over-reacting somewhat, as flurry after flurry of snow melted weakly on the pavements and grass verges outside the office window. By Wednesday morning (28th February) the 'Beast from the East' had arrived, a severe east wind straight out of Siberia, bringing heavy snow showers and freezing temperatures. The next two days it snowed heavily and the thermometer got down to -9 degrees, the lowest here since winter 2010-11. On Thursday morning I walked out of the house with Lunar at 6.45am and immediately saw flocks of Fieldfares in the estate. They were clearly getting desperate. After my walk in an eerie white out I cleared a patch of snow on the back lawn and put out half a dozen apples. By the time I had showered, a flock of 14 Fieldfares had descended to feed in our little garden! Wow! They really were hungry. 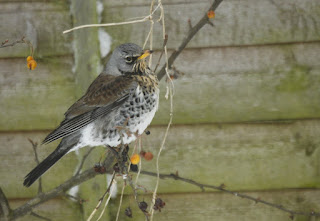 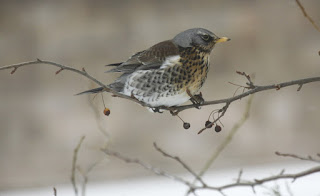 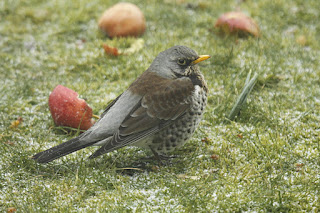 After taking a few pics, work beckoned. The snow was too bad to cycle to work, so I opted to walk although a mate with a 4x4 picked me up part way - thanks Jon!

I put a tweet out about what was going on, and soon many people were replying saying that they had lots of Fieldfares and Redwings coming into too, along with Woodcock and even Snipe!

My 3 mile walk home in the near-dark was pretty chilly with a biting east wind blowing heavy snow in my face.