You will be well aware of the illegal (and in some cases legal) hunting of migratory birds that takes place throughout the Mediterranean each spring and autumn. 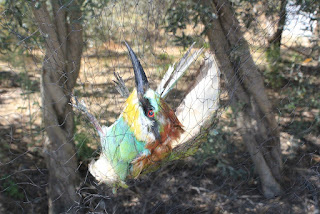 BirdLife International, in their document, The Killing, estimate that 25 million birds are killed each year as they pass through. 25 million! That is mind-blowing and devastating. These birds – song thrushes, robins, skylarks, quail, turtle doves, golden orioles etc are caught in mist-nets (like the ones used for ringing), stuck on sticky lime sticks, shot and trapped in spring traps. Some are eaten, many, such as bee-eaters,nightjars and swallows, are shot for sport. This is one of the causes of the rapid decline of turtle doves, which are rapidly disappearing from our countryside – and yet, one million turtle doves are still killed in the Med each year. This has to stop.

For the last five years, the Israeli bird festival has been celebrating migration and running an event to raise money to stop this slaughter – the Champions of the Flyway. This event is a 24 hour bird race. I have been invited to join the team representing Yorkshire, which is a real honour. Our team – Mark Pearson, Richard Baines and artist Darren Woodhead have no chance of winning the race, but there is a prize for the most money raised, and that is the one we want to win, as to us, that is the most important thing. Given Yorkshire’s infamy as Britain’s worst county for illegal raptor persecution, our team is really keen to show the world not everyone in Yorkshire wants to kill stuff.
The money raised is used primarily to support enforcement of lawbreakers in Mediterranean countries – as mostly the laws are there, they are just not enforced – and also, to educate young people, to try and break the link between current hunters and future generations of potential hunters. This has proven very successful elsewhere, with young people celebrating the migrants passing through and no longer killing them.

Our fundraising has gone well so far and we are grateful to those of you that have already made a donation. If you would be willing to support our team and help us raise funds which will go to BirdLife’s partners to help them stop The Killing, that would be brilliant.
You can donate on our Justgiving page here:
https://www.justgiving.com/fundraising/yorkshire-terriers-2?_ga=2.190917609.2123025538.1519911944-942054525.1511271498
And you can read more about the conservation programme here:
http://www.champions-of-the-flyway.com/
You can read The Killing here:
http://www.birdlife.org/sites/default/files/attachments/01-28_low.pdf