Went up to Bolton-on-Swale Lake YWT on Tuesday afternoon to have a look at the tree felling that has been done as part of our project and to check out the egret fest. Things were looking great, with over 200 Wigeon feeding on the grass, with c60 Goldeneyes on the lake, interspersed with a mix of other ducks. Hopefully, the more open aspect at the south end of the lake has improved the suitability of this area for ducks and waders.

After a bit, I noticed a male Scaup hanging out with some Pochards across from the hide; a smart bird. Nearby, an always-gaudy male Red-crested Pochard added a taste of the bohemian to proceedings. As dusk approached, one of the three Great Egrets appeared, having been hanging out in the outlet channel earlier. It decided to do a spot of fishing, or actually frogging, in the adjacent reedbed, dwarfing a nearby Little Egret. About 20 Little Egrets had arrived along with over 70 Cormorants by the time the dainty Cattle Egret dropped in to the lakeside trees to roost.

Unlike the serene Little Egrets, the Cattle Egret clambered around in a rather awkward manner before settling down. My second Yorkshire Egret hat-trick in less than six months, following my first, in West Yorkshire in mid-September. It turned out the Ring-necked Duck had been showing earlier but had flown back towards Ellerton a little while before I arrived. A fantastic mix of birds at a super site. 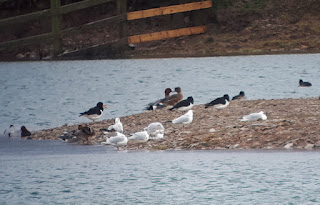 Good to see 22 Oystercatchers using the newly created islands, along with a pair on the main island we've cleared of scrub. 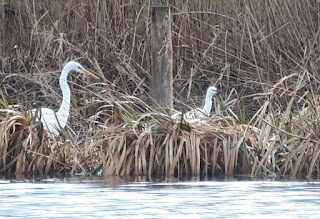 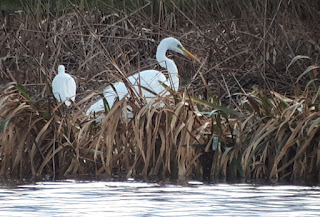 Great Egret, with its smaller cousin 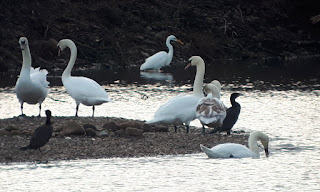 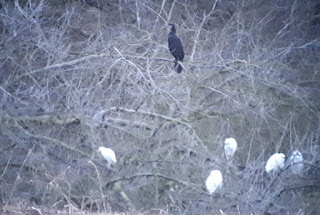 Cattle Egret bottom left, with four Little Egrets and a Cormorant.
at February 20, 2020