A Tale of Two Flycatchers

Following last month's super record of a Taiga Flycatcher on the cliffs at Flamborough Head, it seemed incredible that a second bird had been found on Thursday last week, nearby at South Landing. Initial analysis of comparison photos seemed to indicate that this was the same bird, which on the one hand would make sense, but on the other also seemed remarkable. Firstly, where had the bird been hiding for the intervening 19 days, on a headland with not a lot of cover and a good number of very sharp birders? Also, it would seem very strange that an Eastern vagrant such as this would linger for this length of time in the peak of autumn migration. With another bird in Norway at the end of last week, it seems more likely that this is a second individual and whilst similarities can be found between comparison photos, some differences can also be found. We may never know the truth and either way, the tale of these two flycatchers is truly remarkable, and Flamborough Head has become the place to see this smart vagrant in the UK.

After a very busy week at work, the discovery of a Red-flanked Bluetail literally one hundred metres away from the flycatcher at South Landing proved too much of a temptation for me to bear. With the afternoon off, I headed east to Flamborough. A dozen or so birders were lined up on the path, grilling anything that moved on the woodland floor. It turned out that the Bluetail was really the only bird present here and it became clear that it was working a circuit, dropping on to the ground to pick insects from among the leaf litter, usually from the low branches of the trees. Very occasionally when spooked, it would fly higher up, before descending once trouble had passed. Viewing was tricky at times as the bird seemed to favour the far edge of the copse, although with patience and by kneeling down, the bird could be viewed easily. Dapper as ever, my hunch was this was a first winter male, as the cobalt tail and ample blue rump was much brighter than the bird I saw last year at Whitley Bay. At one point it was chased by a Robin, and it flew up high into a sycamore, calling once in alarm, a quite plaintive short whistle not unlike a Siberian Chiffchaff. 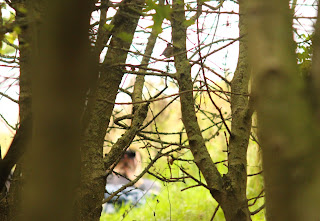 Johnny Mac and The Bluetail! 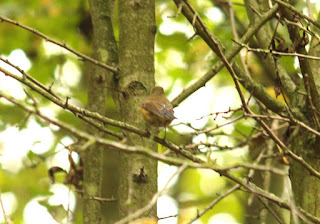 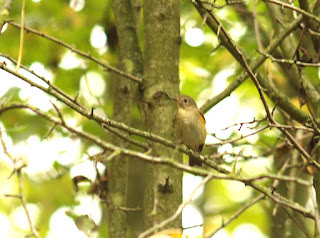 After enjoying the Bluetail, I wandered down the path to see if the Taiga Fly was around. There were a few birders looking but it hadn't been seen for a while. I headed round to the east side and had a chat with Johnny before deciding to head over to Old Fall for the last hour of light. As luck would have it, I bumped into Keith Clarkson and stood for a few minutes' chat. As we did so, the flycatcher suddenly appeared at eye-level right in front of us, allowing lovely views. It flicked up after an insect and was gone. 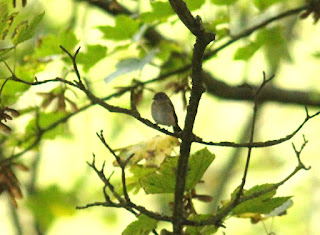 On to Old Fall, the path along the hedge was littered with Blackbirds, all busily feeding. Blackbirds and Redwings erupted out of the hedge as I made my way along. Some flew off high west, whilst others just moved along the hedge towards the plantation. This was really cool and an absolutely enthralling end to the week. A Woodcock exploded out from the plantation boundary as I made my way round, passing my face within a metre allowing us to catch each other's eye.  The darkening trees were alive with the chuckles of unseen Blackies and the Tseeping of hidden Redwings, preparing for the off. After soaking up this marvellous spectacle, I wandered back up towards the road, flushing another explosive Woodcock, waves of Blackbirds heading west overhead, high into the final rays of sunshine, flying inland on the next leg of their migration. 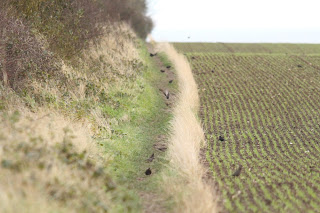 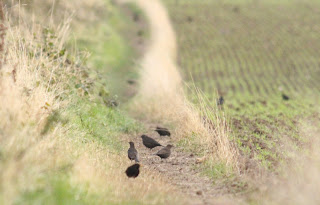 As I finish writing this, news has come of the passing of birding legend DIM Wallace on Thursday. I had the good fortune to meet Ian a couple of times at Birdfair where he would always indulge me in discussions of migration or the east coast -or both. His writing was a great inspiration to me as a young birder and his musings are always a regular conversation topic with birding mates- and always will be. I loved his monthly articles in Birdwatching mag back in the day; perhaps somebody could scan all those in and put them online as I would love to read them again. I think DIMW would have enjoyed the dusk walk along Old Fall on Friday afternoon. RIP DIMW.