A big NW blow this afternoon looked good for seabirds, so I mooched up to Winterton. It was spectacularly rubbish so I came home, to read the reports on t'internet of Long-tailed Skuas and Cory's Shears further along the coast. I had a Fulmar and two Arctic Skuas. Doh!
Same again at dawn? 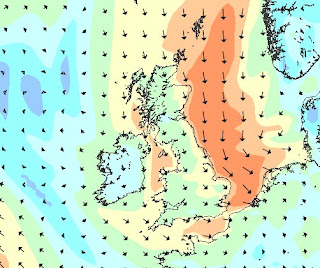 Saturday morning an Osprey carrying a fish flew over me and dropped into Buckenham Carrs. Little else of note save 18 Wigeon, the first decent flock of the autumn. Yesterday's waders had cleared out. 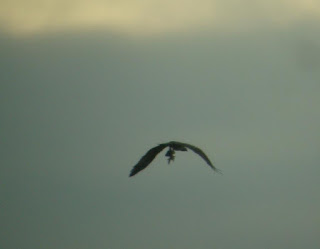 A few hours at Waxham this morning in a fresh northeasterly following loads of rain seemed like a good plan. Very enjoyable birding marred only by the thousands of campers preventing me going too far towards Horsey. Little of note really, though a few migrants about and really enjoyable birding: 2 Whinchats, 5 Wheatears, 4 Lesser Whitethroats and a Yellow Wag over. The sea was rough and in a quick look revealed a pair of Bonxies closely followed by a pair of Arctic Skuas. Lots of ducks moving, mainly Common Scoter, though a few Teal and a lone Tufted Duck were seen.

After lunch, checked Buckenham which held two fine juvenile Wood Sands, plus 6+ Common Sands, 2 Green Sands and 3 Ruff. No sign of any Ospreys circling over Strumpet Fen - apparently there were 2 this morning. I picked up 2 Marsh Harriers, a Buzzard and a Hobby.

Intrigue was provided by the garden when a distinct shrill pee-pee-pee-pee-pee call was heard twice from the tall trees at the foot of the garden...
at August 27, 2010 No comments:

A brief trip to Dorset camping in a very cool place near where the Sibe Rubythroat was a few years ago at Osmington Mills, yielded few birds, but good family fun and some cracking butterflies. Here are a couple of shots of Adonis and Chalkhill Blues. 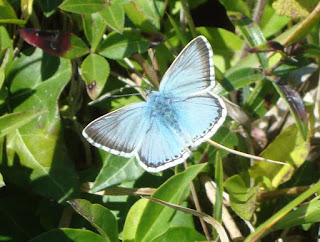 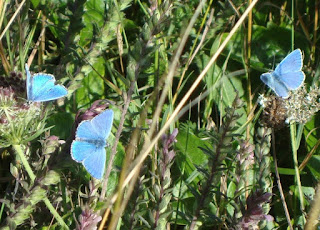 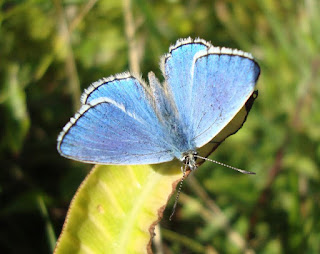 A few days without the family

With the family stowed safely at the inlaws, me and Willow have been able to get some birding in, despite being stuck at work 9-5. On Monday evening a northwesterly felt promising, so I headed straight to the coast. Huddling behind the huts at Winterton it felt more like mid-October than mid-August, with a stroppy looking lead sea pounding the shore relentlessly. Within minutes I picked up a Manx Shearwater, followed by another minutes later. Waders, terns and ducks were also passing by, all moving north perhaps surprisingly. Ten minutes in, a dark shape arcing high over the waves appeared; A Sooty Shearwater. Making the most of the strong wind, it powered north, outclassing the low-gliding Manxies. A few more Manxies headed north before I was joined by a local. There followed a lull, but before long I picked up first one and then a second Arctic Skua heading north. In the next 15 minutes we picked up a further half dozen or so skuas, all adults and some of which hung out to clobber the passing terns. A few more Manxies passed by, plus single Common Scoter, Golden Plover and Grey Plover, both looking fine in summer plumage.

Wednesday morning I tried Buckenham, which has been bone-dry and birdless of late. With a little rain, I was delighted to see some water in the scrapes. This had attracted a few waders; Greenshank, 3 Green Sandpiper, Dunlin, Ringed Plover and 2 Golden Plover. More rain is needed!

After work prompted a trip to Breydon. The tide was already high and a large flock of mixed waders were huddled in the sea lavendar. Highlights were a huge flock of several hundred Avocet, 2 Spotted Redshank and a couple of Med Gulls. A trio of Little Egrets haunted the creeks.

Thursday morning saw me back at Buckenham. No waders today, save a Redshank and 3 Snipe, but a Wheatear was my first of the autumn here and a fine Hobby cruised around low over the grazing marsh, picking off dragonflies. Lots of passerine activity also, with a large flock of wagtails around the cattle, plenty of Mippits and Starlings and lots of finches. Whitethroats, Sedge and Reed Warblers are jumping around in the bankside vegetation in noisy family groups.
at August 19, 2010 No comments:

Day out of the office

Very little birding done recently. Checked out Rush Hills last night, but it was flooded out, so no waders sadly. Checked out the fields near Oby; several scruffy looking Golden Plovers and a big gull flock, but nothing of interest.
Much better at Cley today in a quick look on my lunchbreak. Fine Wood Sands, Spotshanks and Ruff on a cracking looking Pat's Pool. Could have spent all afternoon there had I not been working. Nice to see Bernard down there too, who was showing off his head scar gained from trying to open a gate in the marsh with his noggin.
A handful of the 20 or so Spoonbills were huddled behind an island over on North Scrape, visible from the centre.
On to Holme for a chat with Gary and Kelvin who were in fine fettle, having had a Monties earlier on. Nothing for me, even the resident flock of Hummer Hawkmoths failed to show up on the buddleia by the centre.
at August 12, 2010 No comments:

Over £1,800 was raised by this little skulker! Thanks to the generosity of the finders, Chris and Alison Allen and assistance from RBA's Dick Filby, much-needed funds were raised for Norfolk Wildlife Trust and BirdLife's Southern Ethiopian Endemic Birds Appeal. This is a fabulous result and will hopefully inspire more finders of birds on private land to organise similar events. Great stuff.
Full stories on the RBA and NWT websites.
See http://www.norfolkwildlifetrust.org.uk/Home/News/Rare-river-warbler-raises-funds-for-wetland-conser.aspx
at August 05, 2010 No comments: