Spent two afternoons at Wheldrake - fantastic!
Today (Sunday) I hooked up with Russ. Sadly the gulls didn't perform, instead dropping over towards Swantail. Earlier, Russ almost trod on a Jack Snipe with his new centrally heated wellies (they are really warm he tells me); it flew off all stripes and stealth, before dropping furtively back in over the bank. We also had 8 Curlew, 33 Ruff, 16 Redshank and a single Pink-foot over. An enjoyable afternoon, with a Little Owl on the Crockey Hill road to round things off.

Yesterday was gloriously sunny. No other birders about, I hunkered down in the Tower Hide to watch the gulls come in. Little of note really, though nice to be out. Hordes of thurshes (mostly Fieldfares) towards Storwood and a few Willow Tits buzzing in the riverside scrub. Couldn't pick out the American Wigeon, though presumably still around. An interesting gull came in which looked on the face of it like a 1cy Caspian, but didn't really feel right. The bird seemed to have too much white on the tertials (2w?), not long enough in the rear end, and perhaps too much of a gonydeal angle. The contrast between the mantle and wings didn't seem good enough either. But what is it? 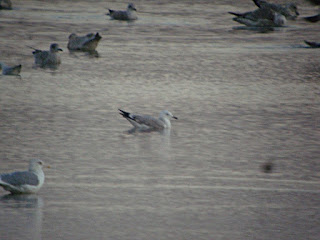