More of the sarnie 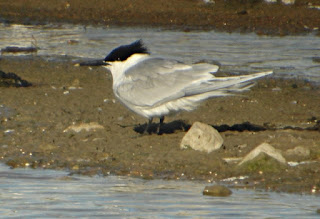 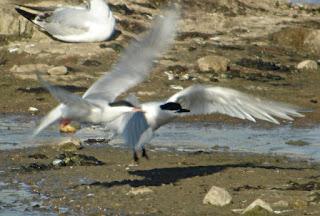 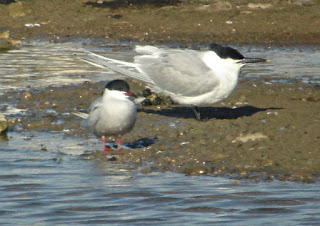 On my way out to our gig in Hitchin, had a quick look in the lagoons. Delighted to find the Sandwich Tern had moved and was now showing much better - see below. Later, I discovered that rock and roll had cost me Black-winged Stilt on my Cambs list. Nevermind!
at April 26, 2009 No comments:

Found this one sitting on L buoy (the tern, not me) off Mander CP at 2.30pm. For once, it was still there an hour and a half later.
Struggled to get the photo as it is about half a mile away.
Most of the migrants in now, including Garden Warbler, Nightingale, Cuckoo, Reed Warbler. Still no Turtle Dove or Spot Fly. 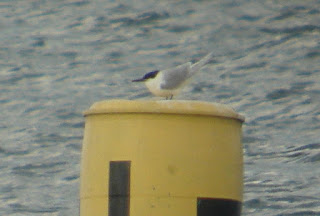 Anyone fancy a sandwich?

After three blank years, this afternoon I finally managed to find a Sandwich Tern at Grafham. After a big blank this morning with Sarnies everywhere else, a stroll along the dam with a sodden dog and a dozing daughter (who will be 1 tomorrow!) revealed a distant tern on B buoy. Switching to scope revealed a big pale tern, with large wedge-shaped head and black bill. Sadly for the first five minutes, the bird was head on and so I couldn't be sure....shortly, it was flushed by a fishing boat and as soon as it took flight, it confirmed itself as full-on sandvicensis. Stonking. It gained altitude as this species has a tendency to do, and leisurely cruised south towards the lagoons then down the south shore heading for the sailing club. Cool! Also present were at least two Common Terns with perhaps another four a little more distant. So, a three species tern day - not bad for the first half of April. Maybe we will get an early Little tomorrow...
at April 11, 2009 No comments:

Up early provided rewards in the shape of three early Arctic Terns heading purposefully west down the reservoir. They did not linger. A first-summer Med Gull was hunting worms on the grass at Marlow early morning too, with a large flock of Black-headeds. Also in today, my first Whitethroat of the spring, singing in the scrub near the north end of the dam. Several Yellow Wags and stacks of hirundines, including plenty of House Martins, were hawking for insects in the lee of the large willows by the dam. Sadly, I failed to pick out a Red-rump...
A pair of Common Scoters were also found off the dam, they later moved down towards Mander, after being flushed by fishing boats. The light northwesterly and drizzle is still going at lunchtime as I write, but little else has turned up. It is going northeasterly tomorrow, so things may pick up. Lots of migrants now in, with Sedge and Willow Warblers all over the place. There are 8 Avocets now in the lagoons, all getting very frisky. 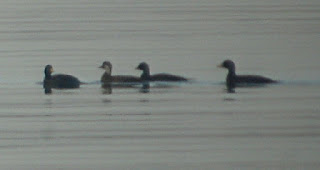 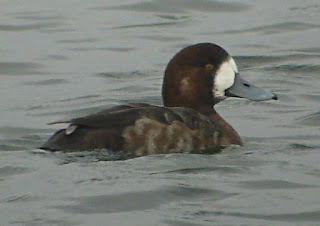 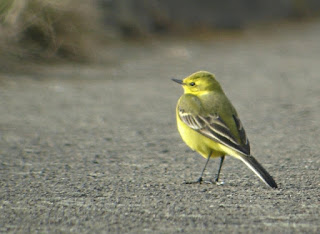