Celebrated the end of the year with a walk up Glen Roy with the Clan. Saw a fine juv Golden Eagle soaring over the slopes. Happy Hogmanay! 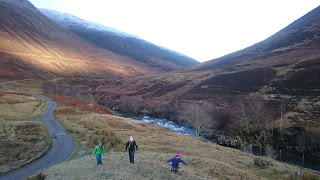 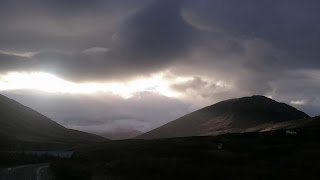 Not up as early as I'd planned due to a pretty shocking night due to this ongoing man-cold. Nevertheless, arrived at a deserted Wheldrake Ings a little after 8. As I fell out of the car in to the muddy car park, the air was filled with the sound of distant Pink-feet - wow - this was like Norfolk! From the bridge top, I could make out a line of these little dark geese happily grazing away across Yorkshire's finest floodplain meadow - lovely! Gulls drifted over, heading back to the Rufforth landfill site- they'd be disappointed: they don't tip on Sundays. 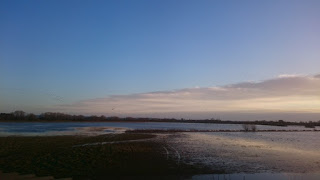 A little later I was in the Tower Hide and was pleased to count 161 Pink-feet, plus thousands of Lapwings, Wigeon and Teal out on the floods. After a little while an unknown danger spooked a huge flock of geese off the low grounds to the north. Predominantly Greylags, the flock contained at least 70 more Pink-feet and two small very dark geese- European White-fronted! Great. These had been found by Duncan Bye last month but had been rather elusive. The geese all wheeled round and then settled in front of the hide allowing me to count the birds and get a few phone-scoped pics. 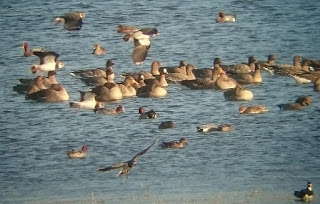 Huge numbers of ducks were out on Swantail Ings, so I carried on down the riverside path to get a better look. The path to Swantail was flooded so I gingerly waded through. As I arrived, the almost-resident Cetti's Warbler welcomed me in usual style, by scolding from its hiding place in the reeds, apparently almost under the hide! The floods were carpeted in rafts of Teal, looking spectacular in the low winter sunshine: a cacophony of peeping filled the air. Surely there must be a Green-winged Teal among this lot? Having found a smart drake GWT at North Duffield earlier this year, I doubted I would strike lucky twice, but not to be put off, I started to squint through my scope looking for vertical white stripes among the hordes of horizontal. After about 40 minutes, I had counted approximately 3000 Teal, 1000 Wigeon, 25 Shoveler, 20 Pochard, 40 Tufted Ducks, 5 Goldeneye, 85 Pintail, 13 Shelduck, 40 Ruff, 2 Dunlin and had briefly seen the Cetti's Warbler fly between the reeds and a willow bush!

And then there was a vertical white stripe. Surely not! But no, it was, a cracking drake Green-winged Teal, busily calling and displaying among its European cousins. Unbelievable! It was a bit distant and was moving quite steadily with a group of 20 or so Teal towards the duck trap, so was tricky to phone-scope, but after a bit of perseverance, I managed a bit of video and a few pics. Having seen a hybrid drake here a week ago I was careful to check for any signs of impurity, but it looked bang on and I suppose could be the same bird as I had seen earlier in the year. The teal floated into some emergent willows and vanished, leaving me a little bemused but very happy. I put the news out, but shortly a pair of Buzzards came low across the Pool and flushed everything. Oh, no - not sure I would be able to refind the bird now! Fortunately, the teal decided it would head back to the same corner and after ten minutes or so, I refound it. A little later another birder (Adam Firth I think) rocked up and he managed to see it briefly before it disappeared into the willows again. 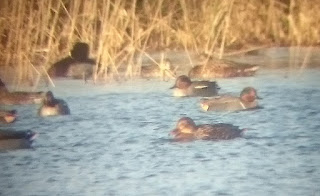 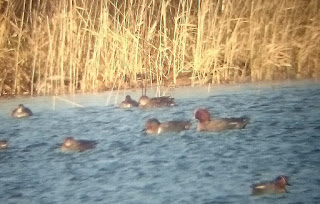 I didn't manage to do the double by pulling out an American Wigeon, so decided to head back as time was getting on. I had brought some cleaning products with me to give the info signs a scrub so rolled up my sleeves and got to work, before clearing the tall plants that were obscuring the view from Pool Hide.

Just by the Pool Hide something large slipped into the water under the willows, making quite a wave and flushing all the Mallards nearby in the process - an Otter perhaps? Or a Leopard Seal. Carrying on back, a familiar call revealed a Chiffchaff in the trees by the windpump - unexpected but quite fitting given the spring-like mild weather. I also saw a Bumblebee - bizarre! Back at Tower Hide the Pink-foot flock had risen to 231 and were back grazing on the grass, like a line of feathery rabbits. To the rear, an adult male Peregrine was hopping about on the grass, occasionally getting up for a fly around, which scared the living daylights out of the roosting Lapwings and Teal, but it didn't seem particularly hungry, and quickly returned to its grassy knoll to keep watch. A Hare tore across the meadows as if chased by an unseen predator, stopping to nibble the grass as if nothing had happened.

Arriving home to the smell of a roasting beast just ended the morning perfectly!

Bizarrely warm today, 14 C at midday. Had a Tree Spug on the feeder this morning which is only about my fourth record in five years. 45 pinkfeet went west over Bishopthorpe at 11.15.
at December 19, 2015 No comments:

A couple of hours at Wheldrake Ings was enjoyable despite the early mist. Quite ethereal as I walked down the river with the sounds of unseen Teal, Wigeon and Pintail out on the floods. A flock of Lesser Redpolls were feeding in bankside willowherb. I spent ages looking through a tit flock for Firecrests but none were present. Four Goldcrests, three Treecreepers and a pair of Willow Tits were nice. Down towards Swantail and the Cetti's called right on cue from exactly the same place as last time. Duncan came out of the hide for a look but despite regular calling it never showed.  c130 Pink-footed Geese flew over and landed on the refuge. A bit later, Dunc picked up a bonus Short-eared Owl flying around behind Swantail. It showed beautifully, successfully hunting Field Voles and occasionally landing on posts. A good look through the ducks revealed a good increase in Pintail with about 55 present. A solitary Barnacle Goose was sleeping on the water. 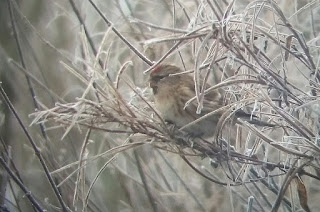 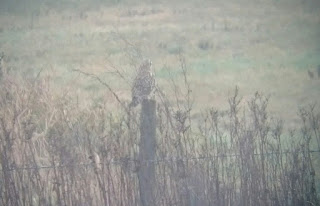