Full-family outing to Blacktoft this arvo. Very enjoyable, highlights being Adelaide hiding in the cut grass on the floodbank, the Marsh Sand again on Ousefleet, a moulting adult Curlew Sand, 178 Black-wits, 2 Greenshank and 10 Spotshanks.
at July 24, 2011 No comments:

Very little birding done recently; been away a lot and training for my 10km run during the week. In Norfolk last week, where the Pacific Swift failed to turn up, though it was a bit of a long shot. Did see an Eagle Owl on a streetlight in Hunstanton, and a showy Gropper at Brancaster. Checked out the Titchwell air terminal (the new hide) which was incredible, and saw a Hobby take a House Martin over the campsite at Burnham Deepdale. Yorkshire has gone Quail-mad, though all I have seen is c50 Crossbills at Dalby Forest yesterday.

Finally got my self into gear and nipped down to Blacktoft Sands for the afternoon. The adult Marsh Sandpiper gave me the run around a little before being grilled on Ousefleet Lagoon. Whilst trying to relocate it, I did hear a Gropper, and saw 15+ Spotted Redshanks, most of which were moulting, but a couple retained quite a lot of black summer plumage. Also present were two Spoonbills and four Little Egrets on Townend Lagoon, c100 Icelandic Blackwits, a Greenshank, three Green Sandpipers, a Common Sandpiper, c40 Dunlins and two juvenile Bearded Tits. 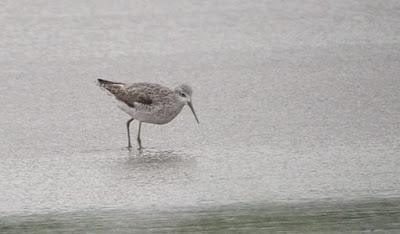 The Marsh Sand seemed to be a moulting adult. Typically white, particularly on the face and throat, with grey barring on the crown, ear coverts, nape and sides of neck. A few arrowhead black marks under legs and vent. A white rear-eyering and a dark mark behind this, making eye stand out. Most of the back fresh grey non-breeding feathers, with only brown feathering on the wings, which seemed quite plain, though with some black and buff barring on the tertials retained breeding plumage. Primaries in line with tail end. Body shape recalled a small Redshank, being quite dumpy. Legs long and yellow-green. Bill characteristically long, straight and needle-fine. Quite a smart Yorkshire tick.

Marsh Sand with a spanking Spotshank 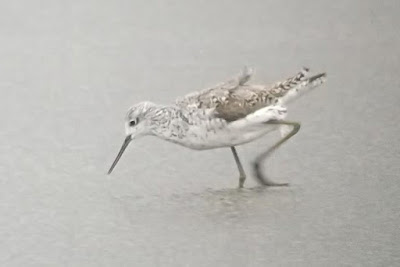 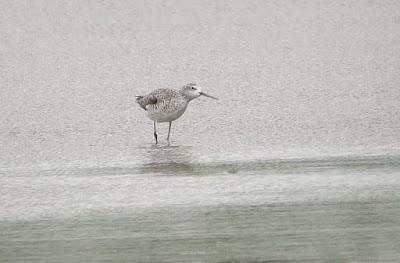 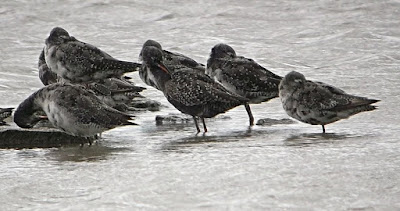 Spotshanks. Fresh in from northern Scandinavia. 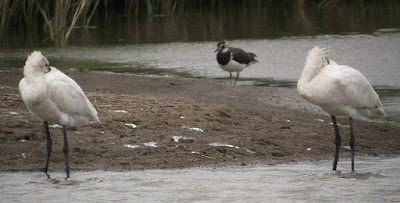 Not much birding done recently. Popped into Hes east this morning. Several Lapwing chicks seen, plus my first Green Sandpiper of the autumn.
at July 03, 2011 No comments: