Up to Horsey for dawn, met Dean Harlow in the car park, plus some other birder who was from Peterborough apparently. Did Cambs expand it's boundaries overnight? No sign of any Wheatears, so headed down to my little Wheatear-spot, where again I drew a blank. On the way back I realised another birder was glued to his scope, so I clambered over. The Pied Wheatear was actually in the pillbox, presumably having roosted in there overnight. It was quite happy scuttling about in the gloom, among the shit and syringes for a bit, before venturing outside to admire the local graffiti. Great views of a smart, educational bird. I had not really noticed how obvious the streaked breast band was before, and this is a good feature I reckon. Scooted north towards Waxham to see if I could pull it out of the bag. There was much more activity than on Sunday, with several Chiffchaffs, Goldcrests and Robins in the bushes, with a lot of finches and mippits overhead. Apparently 'our' Shore Lark was still present by the bogs on the campsite. Sadly, work beckoned, so off I went. 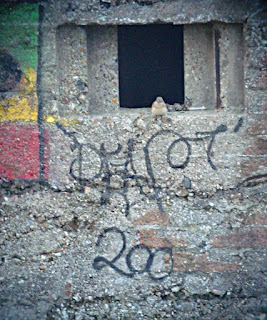 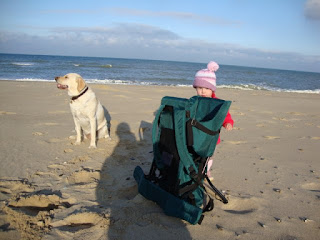 Willow and Adelaide, Horsey, Sat 10th Oct. Willow is thinking, "Dad, what is that small brown bird on the edge of the beach with a white arse?"
at October 15, 2009 No comments:

Monday morning, followed Willow down the garden to see if a Y-brow had dropped in overnight. Suddenly aware of a lot of Redwing calls over head. Through the half-light it became apparent someone had left the gate open in Scandinavia and a torrent of Redwings were now flooding in over the North Sea. I was simply captivated, as wave after wave of these dudes headed west straight over my head. Occasionally flocks switchbacked in to feed on the haws down the lane next to the orchard. Soon, Fieldfares came over, with occasional groups of Song Thrushes. A wheeze, and three Brambling flicked in, landing briefly in the big Ash, before heading on west. More and more Redwings. They were coming thick and fast; my counting reduced to estimates in tens. One flock contained over 500. I set out to stretch Willow's legs round the fields. The thrushes continued non-stop whilst I did the entire circuit and continued as I walked down to the station. I counted nearly 150 whilst standing on the platform. Awesome stuff! I just wish I had the day off! Apparently there were 40,000 over Sandy later. Philip texted me at 8am to say 'there are a lot of thrushes over Cambridge'. I can't imagine how many birds went over that night and morning, but presumably a large proportion of the Scandinavian population. Maybe the westerlies had backed them up and then with the change in the weather, the floodgates opened. I reckoned there would be some good birds found soon...I was right.
at October 15, 2009 No comments:

More Teal than you could shake a stick at

Had a wander south from Horsey Gap yesterday arvo. Lots of Brents and Wigeon passing west offshore. Two or three Wheatears were at the foot of the dunes, whilst a few Swallows and Redwings went over, adding to the ones in the garden earlier.
No sign of the Yellow-browed Warbler reported earlier, sadly. Checked the Goldie flock near Fleggborough, but nowt doing. Lots of pinks around today generally.

Today, Sunday, did the WeBS count with Reg and John at Hickling from the boat. Not a lot doing, though a second winter Med Gull flew over, followed by a first winter on Swim Coots. Highlights from the two hides were over 2.5K Teal, probably more than I have ever seen in one place before. Pretty amazing; I would have liked to have gone through them all carefully, but we had to get on with the count. Other notable birds, were c20 Ruff, 3 Dunlin, several Snipe, 1 Ringo and the usual Bearded Tits and Marsh Harriers.

On to Horsey where after refuelling with a bacon butty, we went north for a change towards Waxham. The habitat looks impressive, with a variety of dune slacks, scrubby patches and short grass fields. We shortly arrived at a caravan park, which may be at the south end of Waxham. This had a lot of activity and looked great for a Tawny Pipit or something. Within a few seconds Reg landed the bird of the day, with a Shore Lark scuttling about in the dirt. A really stonking bird. I texted a couple of local birders and it turned out it was the first in this area for a while, so it caused a mini-twitch. Carried on doing the scrub as we went, but without success. A few Redpoll sp. went over and a Siskin or two, but all the Y-brows and Radde's eluded us. But we were happy with Shore Lark; beats the usual Wheatears...

In the evening, Willow and me pottered down to the river at Buckenham Marshes. A white blob on a distant gate was presumably a Barn Owl, but with the scope it metamorphosised into a large rather white-breasted Peregrine. It sat there for fifteen minutes, before heading east like a rocket. I didn't see what it went after. A little later three Marsh Harriers came in from the east, and went off down the valley towards Strumpshaw, presumably to roost. A decent flock of Lapwings and gulls were on the scrape, which seems to be filling back up. Sadly, I could not find a third Med for the day.
at October 11, 2009 No comments:

When will it go east?

Well, maybe the end of this week. Pottered through Broadland on my annual birthday birding trip, looking for errant Sandhill Cranes, without joy and grilling golden plover and geese flocks for rares, again, without success. Didn't bother with bushes due to fresh westerly breeze and headed instead for Cley, where Philip soon picked up the bird of the day in the shape of a smart juv Pom heading east. A fine bird with classic double white wing flash, pot belly and casual but powerful flight. Had a look on the marshes, with a Little Stint and 26 Snow Bunts being noteworthy.

Earlier today, a dawn walk at Buckenham revealed a flighty flock of 28 Barnacle Geese plus one presumed Snow or Ross's x Barnacle hybrid. Also 11 Bearded Tits here and a few Golden Plover.
at October 05, 2009 No comments: