The Thickest of Knees

Spent a fantastic day at Snaizeholme with the Woodland Trust, discussing their plans for rewilding this super little valley west of Hawes. Their ambition is great and logic sound and I can't wait to see how it develops from a sheep-grazed desert into a mosaic of upland habitats rich in wildlife. I saw my first wild White-clawed Crayfish in the stream here, rescued a Barn Owl that was trapped against a window in a stone barn and got bitten to death by Horseflies.

On the way back, news came through that a Stone Curlew that had been found early morning at Fairburn Ings was still present. This was a potential Yorkshire tick for me and they're just damn cool birds, so I carried on down the A1 a couple of miles and nipped into Fairburn. A line of birders were arranged along the edge of the road scanning New Flash and I was pleased to find that the bird was still present, sitting along the dry muddy shore at the back of the flash. Not exactly prime thick-knee habitat, but it seemed happy enough. A very kind birder from Driffield (thanks man!) let me have several looks through his scope and even let me take a couple of pics, which was great as I hadn't got mine with me. After a bit, the bird revealed those thick knees, standing up, having a bit of a preen before stalking a little way along the shore, like a big feathered reptile. It was a smart bird, a juvenile in pristine plumage. Very nice. 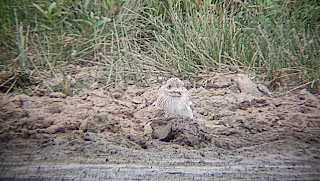 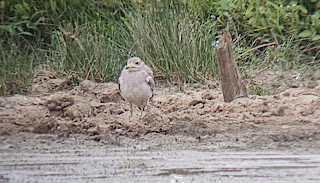 It is early July and birding feels to be at a bit of a low ebb. Migration is kinda slow, with just a few waders starting to wander back south and a few flocks of failed breeding Lapwings and Curlews standing around forlornly in fields. Attention has turned to plants, butterflies, moths, my pair of Swifts with growing chicks; anything to feed my urge for wildlife. But just occasionally, a wandering mega can turn up. 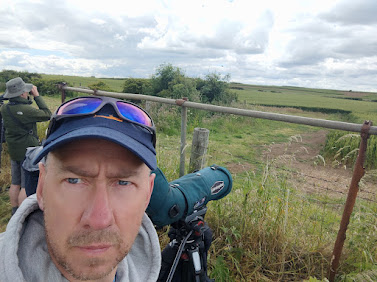 Last week this happened, when Bempton birder Trevor Charlton found a huge rarity, in the form of a male Turkestan Shrike, fresh in off the sea. It promptly disappeared but was refound a few days later and has remained faithful to Wandale Farm since then. With the identity confirmed, it seems to be the first definite record of this species for Yorkshire, so has caused quite a stir in the birding scene, in an otherwise quiet time of the year. A wound on the right side of it's breast shows it to have been the bird that had previously been seen in the Netherlands.

I have seen several Isabelline-type Shrikes in the UK, including a self-found (with Dunc Poyser and my Mum and Dad) back in 1989 in Cornwall, but most have been Daurian Shrikes, with only a bird seen on Shetland in 2019 identified as a Turkestan (though I need to check BBRC to see if this was confirmed). Therefore, this was a bird I was keen to see, but work and family commitments stood firmly in the way. To my delight, the bird hung on and Sunday afternoon gave me my first chance to take a break and go birding. After an enjoyable drive east and a brisk walk, I approached Wandale Farm just inland from Staple Newk. Unfortunately, I made the rookie error of leaving my coat in the car (it was warm after all) and just before arriving at the site, the heavens opened and I got drenched. I plodded on and an unexpected flicker of movement in the farmyard revealed first one and then two Black Redstarts, lifting my spirits despite the deluge. Up ahead were a gang of very soggy, but smiling birders, standing in the stack yard, watching the bushes nearby. The Turkestan Shrike had done the sensible thing and dived into the bottom of a thick Hawthorn as the cloud burst and hadn't reappeared. I didn't blame it to be honest. After a few minutes, the shower abruptly stopped and the gathered throng began to gently steam in the warm sunshine. Yellowhammers and Tree Sparrows took up their toil and began flying about, presumably feeding young unseen in the scrub. But there was no sign of the shrike.

After fifteen minutes elapsed a little anxiety began to creep in. I scanned hedges further away wandering whether the shrike had slipped away unseen. No sign. But then, as if by magic, the shrike suddenly appeared in a close tree! Whoa! It was only about five metres away. 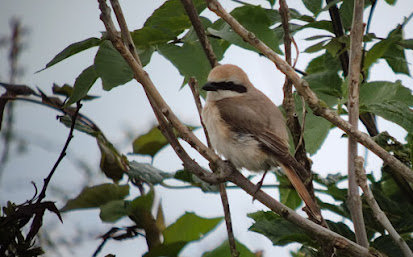 This was one of the closest views of any shrike I had had, let alone a first for Yorkshire. It snaffled a few unlucky bluebottles, coughed up a small black pellet and did a little preening as its plumage dried off. The shrike didn't seem at all bothered by our presence and continued to feed happily from the bushes surrounding the yard. After a bit it dropped on to a concrete gate post before flying across a field to a distant hedge. 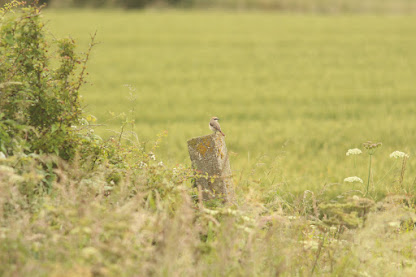 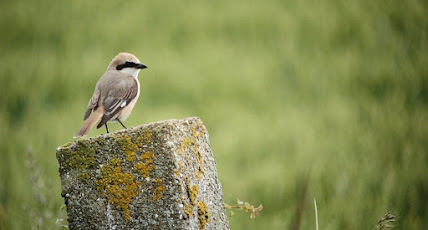 It was interesting to watch at this range - a more standard view of a shrike I suppose - and even at that range, the key features could be seen. After fifteen minutes it returned to the stack yard and gave further crippling views.

Having filled my boots, I wandered up the track to the cliffs, enjoying one of my favourite vistas, the teeming, towering cliffs of Bempton. Sadly, the Black-browed Albatross wasn't around, but it was nice to see the usual gang of seabirds, seemingly untouched by the ravages of avian flu which is wreaking so much havoc elsewhere. After bumping into colleague and fellow birder Becky Austin, I celebrated the shrike with a vegan sausage roll and a coffee back at the RSPB visitor centre before weaving my way back over the Wolds.