Into another Coronavirus lockdown, I will stick to the local area for my birding exploits. Hopefully, we will get through this and we will all be able to spread our wings wider, come December.

Whooper Swans graced Bank Island at the weekend, majestic in soft afternoon light, throwing some cool shapes with snaky necks. I wandered through mud to the hides at Wheldrake Ings, the yellowing Willow leaves shimmering like Aspen in the light wind. Pink-footed Geese yelped overhead in straggling skeins; a Cetti's Warbler exploded acoustically from the reedbed at Swantail whilst in the murk, a Marsh Harrier patrolled the browning grass; panicking Teal and Wigeon as he went. Fine scenes, close to home. 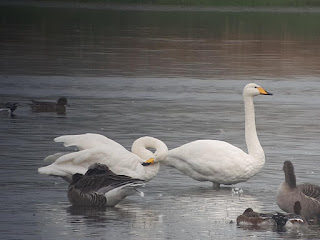 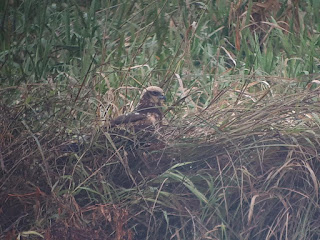 Had two sessions at Elvington looking through a flock of Golden Plovers today. Only a third of the flock of 750 was present and I failed to find anything interesting among them, although it was an enjoyable way to spend a couple of hours. As usual, a few dinky, grey or partially summer-plumaged individuals elevated my pulse briefly, but sadly all proved to be Euro Goldies on a closer look. A brief spell at Bank Island late morning yielded eleven Whooper Swans flying south, a stonking juvenile female Peregrine that came incredibly close to the hide and 52 Pintails, among a couple of hundred Wigeon and Teal. With lockdown #2 starting Thursday, not sure when I will be back. 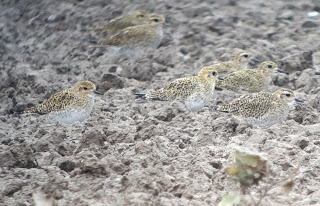 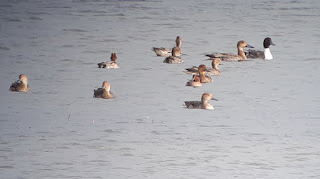 Many of the Pintails were still moulting, but there was one handsome drake among them.