After a rather quiet WeBS count this morning, our first of the season, a huge surprise came in the form of two juvenile Spoonbills that had appeared in front of the Lagoon hide. Mark Piercey found this first for Grafham only a couple of hours after we had finished scouring the whole site during WeBS! Awesome views were had as the pair fed happily in the shallows. 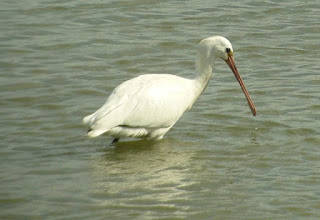 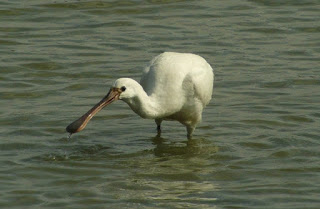 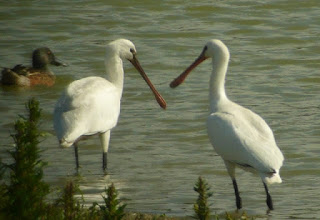 The calm before the storm, well, maybe.
Took Willow out to give her a dip in the res and took the opportunity to scour the lagoon scrapes and bushes. A couple of Black Terns are still lingering over the water, whilst a pair of Little Egrets showed well in front of the newly-refurbished hide. A Green Sandpiper called, but remained unseen. Lots of warblers in the bushes stuffing their faces with elder berries, including Sedge, Garden and Blackcap. A Chiffchaff in song nearby was obviously confused...
Returned home to a giant nappy catastrophe which Vicky left me to sort out. This required quite delicate and precise manoeuvres to avoid getting yellow poo all over my clean suit! Nice...
at September 10, 2008 No comments:

Awoke to a brisk northwesterly wind and rain showers - could be good for some seabirds! Walking the dog along the north shore revealed a trio of Common Sandpipers and little else, though intrigue was provided by four medium sized waders which frustratingly avoided identification as they flew south.
News came of a juvenile Gannet over Paxton and for a few minutes my heart raced until the update came that it had headed due south. It arrived at Stewartby Lake in Bedfordshire later.
Despite seemingly perfect conditions, nothing appeared save for one or two juvenile Arctic Terns with the Black Terns off Mander.
I retired to spend a bit of time with the nipper and have lunch.
Vicky's friend turned up later, so leaving them to coo over the bairn, I headed off again in search of skuas. Five minutes after arriving at Mander, the rain stopped and a large dark long-tailed raptor got up out of the woods and began circling out over the reservoir. Scoping the bird, I realised I was watching my first Cambs Honey Buzzard - Awesome! I quickly rang out the news in case anybody else was in the vicinity and then got back to enjoying this big barred beast as it headed off south over the car park.
Still no seabirds, but for the next hour or so the raptors put on a fine show, with 2-3 Marsh Harriers, Osprey, plus several Hobbies and Buzzards. Great stuff.
Hearing the news of more skuas coming south out of the Wash into Cambs, gave us renewed hope, but it wasn't to be and by 5.30 I gave up. Back out after tea and the gull roost revealed a fine adult Little Gull.
So ended an exciting day that lived up to expectations but not in the way I had imagined!
at September 08, 2008 No comments:

An hour watching from the gate at the harbour (Mander CP) revealed the juvenile Marsh Harrier hunting over Savages Creek, the Osprey (which has been here a week now) soaring over the res for at least 45 minutes, 2-3 Hobbys, a couple of Buzzards and a Sparrowhawk. Strangely, I didn't see a Kestrel! The Osprey caught a fish at one point but it was seemingly so heavy that after a lot of thrashing around in the water, it finally let go and flew off empty-handed (or should that be empty-taloned?!).
4 or 5 Black Terns still flicking about. No sign of the Manxie, but there were a lot of boats around, so maybe it was sheltering in a secluded bay somewhere.
at September 06, 2008 No comments:

Whilst Willow waded in the water on the approach to Dudney Hide this morning, I thought I would take the time to have a scan over the res to the east. A few Black Terns dipped and swerved over the water. Suddenly in the background a white cross with black wing edges arced up over the waves - A Manx Shearwater! Fab! I have seen a few at Grafham Water before, but this is the first I have found. The bird settled among the waves out towards Church Hill. I put the news out immediately.
I dragged a soaking Willow back home and shot round to Church Hill where I met Owen and Monica Marks, David and Anne Hollin and Colin Addington, all of whom had had close views of the shearwater. Shortly, the bird flew past us, providing much closer views than I had had earlier. It landed off Mander.
Owen called a Common Swift with the hirundines overhead. I then went for a look at the south end of the dam and Plummer to try and dig out a phalarope blown in by the blustery wind, but without success.
A good start to the weekend!
at September 06, 2008 No comments:

End of an era?

Well, two weeks without a laptop and indybirder.com is no more. At least for now anyway. Two walks along the dam revealed a lot of rain and nothing better than a damp ringed plover. The gulls were a bit unsettled prompting thoughts of skuas, but I couldn't find anything. Maybe one of the sabs or phalaropes will find their way here tomorrow...

Here are two shaky, distant shots of Martyn Davies' fantastic Baird's Sandpiper he found at Paxton Pits. An awesome find and due reward for many hours of dedicated patching. I twitched the bird and was fourth on the scene, enjoying some good but distant views in the evening light. 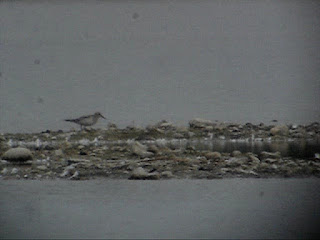 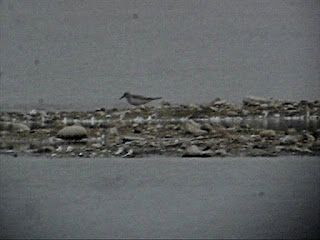 Here are some recent shots from Grafham: 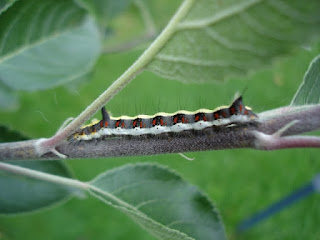 Vapourer Moth caterpillar on apple tree in the garden. 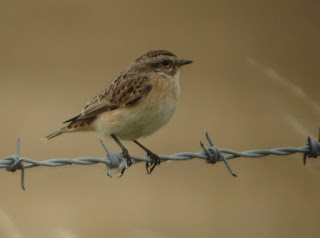 Whinchat, at the foot of the dam, 4th Sept 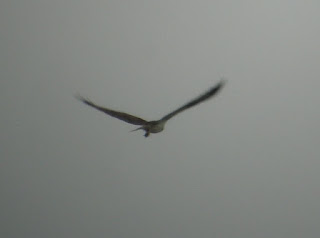 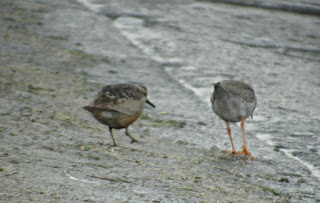 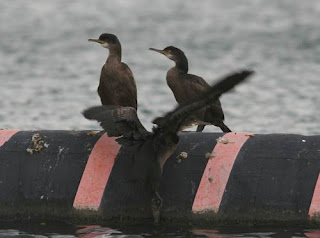