And did you walk from the town into the heather

A work trip to Little Beck on the North York Moors to talk to BBC TV about YWT's objection to the proposed potash mine which threatens the National Park, gave me the opportunity to pop in to the delightful YWT reserve of Fen Bog. I was on the hunt for Wood Tiger, a belter of a moth that I have never seen. Sadly, I couldn't find any, but did manage to get a brief view of a Small Argent and Sable, a tiny black and white moth which was hanging out among the profuse snow drift of Heath Bedstraw. Several Small Pearl-bordered Fritillaries sipped nectar from the heather. They were very fresh, perhaps newly emerged. A trio of rather pale Painted Ladies were knocking about, the harbingers of a mooted major immigration. Also, two Small Heaths and a Large Skipper. 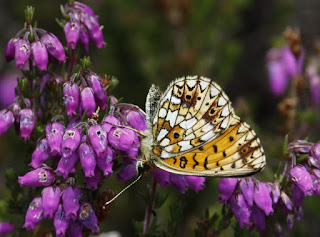 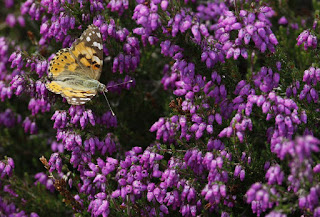 Small Pearl above, Painted Lady below

No idea why this Barn Owl was sitting on the roof of the Judges Lodgings on Lendal in the City Centre of York at 2pm today, but the local Herring Gull gang were seriously unhappy. They mobbed it relentlessly. 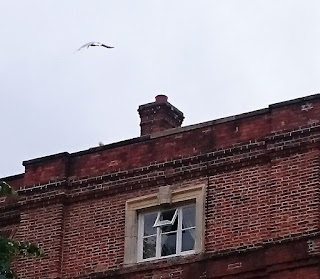 Barny is sitting to the left of the chimney.

POST SCRIPT: It turned out this was a renegade from a falconry display in the Museum Gardens. Duh!
at June 18, 2015 No comments:

Mothing has started to pick up as night-time temperatures have improved. Caught my first ever Lime Hawk on Wednesday night, plus my first Elephant Hawk of the year. Three other garden firsts: Magpie, Green Carpet and Silver Ground Carpet. Also, on a tip from a friend, had a look down a lane running out of the village and sure enough, found a perky Little Owl on a pollarded Ash staring at me mid afternoon - nice! My House Martin survey for the BTO was a disaster though as I didn't find a single nest! Had a slow cycle round Keble Park afterwards and found five nests, including the one that is being built on our house. 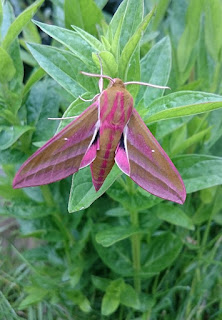 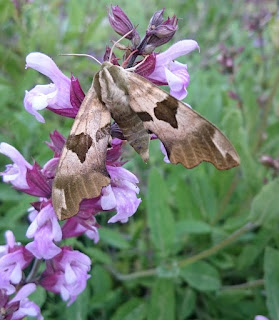 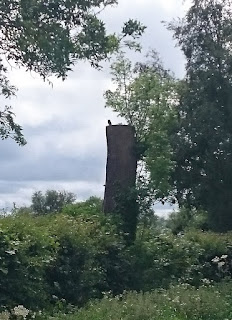 A day with the RSPB

Up ridiculously early (03.45) and was on the road south by 4am - eek! Amazed to see two Buzzards actively hunting by the side of the A64 at 4.15am, seemingly quite early. Arrived at Old Moor at 4.50am full of anticipation, but on entering the Wader Scrape hide my heart sank, as the other early risers were looking dispondent. The Gull-billed Tern that roosted last night, had gone. Doh! Spent the next hour and a half grilling every passing gull and Common Tern, but alas the GBT never arrived. Saw a fine Med Gull, a couple of Barn Owls, Common Sandpiper and a LBBG killing and eating a recently fledged BH Gull which made me a bit hungry for breakfast! 6.30am approached so I had to leave having dipped spectacularly, but made it back in time for Vicky to go to work and me to take the kids to school. Twitching Dad!

Once duties were done, headed out east to the delights of Goole and then along the south bank of the Humber to my old stomping ground of Blacktoft Sands. Nothing much had changed here, though I didn't see a single Avocet and the water levels were very high with steep sided islands. Perhaps they will drop the water later in the summer for a few passage waders. Nevertheless, a fine couple of hours with great views of the pair of Montagu's Harriers that have successfully nested here. I wouldn't normally put out this kind of news on my blog, but this pair has been widely publicised by the RSPB and others, so they are well known.

The female showed for ten minutes at about 11am, gliding around over the reedbed, before dropping out of sight for another hour. She had very well marked pale upperwing coverts and a very well marked tail. At 12.30pm, the male came in from the west - what a stonking bird! -and was soon intercepted by the female. He briefly chased a lumbering Marsh Harrier away, before having a quick inspection of the chicks. Soon he was off west again, presumably to seek more prey. About half a dozen Marsh Harriers seen, plus a single Spotted Redshank flew past calling. No sign of the Ring-necked Duck although a rather scruffy first summer Tufted Duck was being merrily strung by several birders in Xerox Hide! 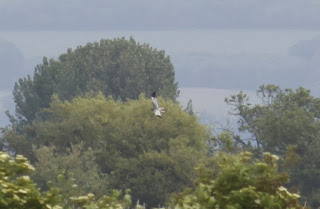 Male Monties. Great bird, but a bit too distant for my little lens!