No sooner had I been dropped off in York, than Kat was picking me up to take me back out there. This time to Muston, where we had a fine curry with friends. Reg had arrived 15 minutes early and had sunk three pints of strong cider on an empty stomach. Sadly, his fine curry was enjoyed more than once, much to the surprise of our hostess. Reg decided air was called for, only to be returned by the neighbourhood watch 20 minutes later, having been found lying in an alley. This maybe the most exciting thing to happen in Muston in ten years. Unfortunately for Reg, he had done his shoulder in whilst falling over, limiting his bins wielding activity for the rest of the weekend.

On to Filey Dams, a YWT reserve which had changed a lot in the last 15 years, where a Bar-wit (good record?) and a couple of Ruff, sadly were not hanging out with a Solitary Sand today.

Flamborough beckoned and we were soon enjoying the cover in Old Fall, where the Yellow-browed Warbler still evaded us. A Pied Flycatcher and Redstart encouraged us to linger, and shortly the Phyllosc started calling like a mad man, allowing us to finally locate it in the southern willows. Smart. Interestingly, this bird would intersperse it's usual call with occasional monosyllables, which heard alone could have been confusing.

At lunchtime, Redwings started to drop in out of the sky; wierd on such a fine day. It is exhillarating to see these flocks come in off the sea and pitch up in a hedge. You can almost feel their relief and joy at having survived crossing the North Sea non-stop and being greeted by fine weather and berry-stuffed hedges. Great! A Pied Fly was new in by the lighthouse too: 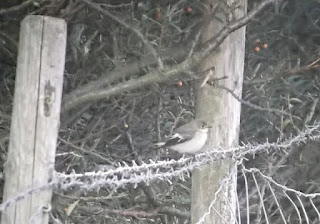 We hooked up with Craig Thomas and headed round the northside. Whinchat and Wheatear near Thornwick, plus a plethora of Redwings and Song Thrushes in Holme's Gut suggested better was to come, despite the heat. And it was; the Rose and Crown, for fine ales and chats.