A fun few days spent at YWT Spurn with the BBC Autumnwatch team. The obvious benefit of this was I got to spend a fair bit of time at Spurn, in peak season. Don't forget to watch - 8.30pm on BBC2 this Friday.
Here are the highlights:

6-7 October
Not much going on though 6 Barnacle Geese in from the north along with hundreds of Pinkfeet was nice. A Barn Owl was a Spurn tick for me, plus a couple of Bramblings.

9 October
Not sure what influence the weather had as the wind was still southwesterly, but the appearance of low cloud and occasional spots of rain really upped the migrant stakes, particularly in the afternoon, when hordes of Skylarks, Redwings and Song Thrushes, plus a few Blackies and Fieldfares came in off the sea. An Arctic Skua and Short-eared Owl also put in appearances at the Warren. Sadly, the Red-throated Pipit that flew over Chalk Bank late morning didn't stick. Disaster however struck when my scope blew over and broke the tripod fixing and damaged the zoom. Oops! Shortly my spirits were raised when the Obs trapped a stonking Hawfinch at Kew and I managed to scramble the BBC crew in time to film this monster. My second east coast Hawfinch in a week. 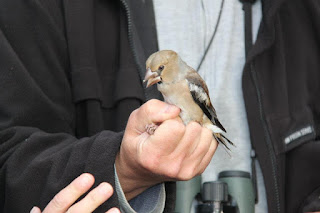 Better was to come though! Andy and me accompanied part of the team with Michaela Strachan to do a short piece of film near the lighthouse. We parked up and walked north to meet them.

As we walked through the marram, a bird got up almost at our feet. It called once explosively "pseee"- I shouted "Red-throated Pipit!" and to my relief, Andy immediately agreed. The bird looped round showing white, boldly striped underparts, and then landed on the ridge next to the road. Andy put the news out on the radio, but got no response. Surely somebody was still on channel?!

Michaela came over and was keen to see the bird, so we walked down the road to where it landed. I set my camcorder running just in case and walked towards where we thought it had dropped. Sure enough, the bird took flight again at close quarters, called once and headed south towards the car park where it dropped again into the marram. Amazingly, I managed to capture the bird on film and even better, you can hear the call!

Shortly, a convoy of cars screeched up unloading many of the Spurn locals, to my relief. After a little walk the bird showed again in flight, this time calling several times, before returning to it's original location. This was a Yorkshire tick for me and even a Spurn tick for some of the gathered birders, so all went away happy.


And here is the video - look and listen carefully. The wind noise makes the call a little harsher than it sounded in reality, but you can just about make it out.

10 October
Not much of note!

Lastly thanks to Andy and Reenie for putting me up, and to all the Spurn guys, especially Ian, Paul, Adam, and Andy et al for all their hospitality.

Nice one Jono, kinda kicks the ass of my rock pipit recording I have just put on me blog from hes this morning!