Two visits today, this morning helping to show visitors the ducks and then this afternoon in a flying visit to twitch Tim Jones' Caspian Gull. This morning was very cold c-3c, with the Ings looking stunning, frosting twinkling in the sunshine and c100 Pink-footed Geese went over high north at 9.30am. Two patches of unfrozen water remained. One on the pool held one drake Goldeneye and one Ruff, among the commoner ducks. A Chiffchaff called from willows by the hide. Further out, the injured Whooper Swan was around, plus 21 Shelduck. 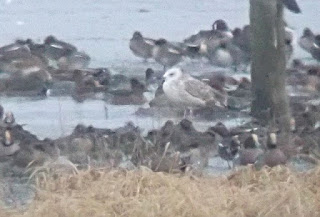 This afternoon a text from Tim alerted me to the reappearance of the Caspian Gull he found yesterday. Things were defrosting a little when I got there, and the Caspian Gull was being grilled by Tim, Chris and Jack on arrival. A classic first-winter with 45degree stance on long pale flesh legs, with a small head and long pale-based bill and long wings. A tiny amount of smudging around the eye on an otherwise white head, set off by a neatly marked nape shawl. There appeared to be a number of second generation pale grey scapulars, plus solid dark brown tertials with only a hint of a pale edge. This bird sports a yellow darvic ring, though distance prevented the code being read. A bit after 3.30, the bird headed off high to the south with other gulls, presumably to roost on the Humber.
at January 15, 2012