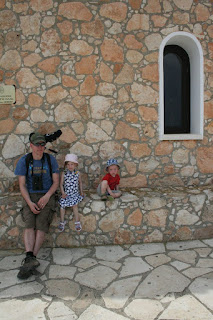 A fantastic week of sun, sea, sand, haloumi and Spectacled Warblers in sunny Cyprus. Decided to stick in the east of the island so as to minimise travel. We stayed at Protaras, a few minutes drive from the legendary Cape Greko, kind of like the Cypriot Portland Bill and with some stonking rarities to it's name. It would be the end of passerine migration, but I was still hopeful, plus there should be a few Southeastern European species that would be new for me.

Some highlights:
26th April, Protaras area.
Our first stroll down to the beach and I found several Blackcaps feeding in flowering bottlebrush trees. The first of these had yellow pollen all over it's throat, which for a minute made my pulse quicken! A familiar call heralded Bee-eaters heading north up the coast. Several shot over at low altitude, closely followed by a Cuckoo moving over the sea. So a few migrants about then! After the kids had enjoyed their first paddle and ice cream, we wandered back to the gardens around the apartments. I decided to have a check of how easy it would be to get up the hill overlooking the village, which kind of reminded me of Beeston Bump at Sheringham. Sadly, it wasn't immediately obvious and would need a bit of a scramble - another day perhaps.

On the short walk back to the apartment, I flushed a grey and white bird. It landed on a low branch - big white primary patch reaching the wing-edge, pale grey rump, broad white tertial webs with fine white tips - a female Collared Flycatcher - smart! The bird showed well for a few minutes before melting away.

Lots of hirundines were overhead and back on the balcony I soon picked up some smart Red-rumped Swallows.  A little while later and alarm calls got me grabbing for my bins again, as a male Lesser Kestrel circled overhead. Later that afternoon as we enjoyed a dip in the pool, both a Peregrine and a Hobby moved north and the Lesser K put in another appearance.

Early in the evening we headed downtown. Movement in some fruiting apricot trees proved to be a whole gang of migrant warblers. Several Lesser Whitethroats and Blackcaps gorged on the rotting fruit or chased the flies. Suddenly, a beady yellow eye stared out from behind a leaf. Then, a large, adult Barred Warbler hopped into view - corking and an unexpected end to a great first day.