Headed over to Spurn early with Reg. Went to Sammy's Point first - a Yellow Wag dropped in, then two male Ring Ouzels were found nearby in the first paddock. A flash of white revealed the first of many Wheatears, grounded by the freezing north wind. These are a bit late for British birds, though did not look like leucorhoa, so presumably Icelandic or Scandinavian birds. Further on, we had a look at the Humber and found a smart adult Spotshank among the hordes of Redshank, Dunlin etc and a female Marsh Harrier moved across the fields towards Spurn.Warblers were plentiful in the bushes further down, with Lesser Whitethroats, Whitethroats, Willow Warblers, Chiffchaffs and Blackcaps all noted. Sadly, we missed the best of the bunch - see later! 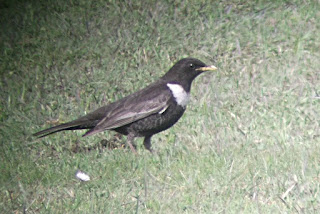 On to Spurn, we drove to Chalk Bank and did a circuit all the way to the Point and back. It was quiet initially, with the first notable bird a Short-eared Owl flushed at close range by the lighthouse. Shortly, a Merlin whipped along the dunes and then a calling Black Redstart was tracked down - a female, on the wall by the parade ground. We had a good thrash of the point bushes, and picked up a pair of Pied Flycatchers, with a third calling bird remaining unseen close by. Sadly, a Wryneck was found simultaneously by another birder, but eluded us. A male Siskin dropped in to the poplars and then we decided to head back for lunch. On the way back, I found a female Redstart and a Whimbrel flew over. Reg up ahead was scoping a bush - when I got there he announced another female Redstart sharing a bush with a Whinchat. So things were picking up.

We picked up a radio from Adam and decided to head back to Sammy's to have a look for the Wood Warbler that we had failed to find earlier. On the way, we stopped just near Rose Cottage to grill a corking Wryneck that Steve Exley had found which was feeding on the footpath right out in the open. A cracking view!

Down at Sammy's the Rouzels were still feeding in the same area. After a while without seeing the Superphyllosc, a message came through from Mick Turton, also at Sammy's that he had just flushed either a Monties or a Pallid Harrier which was now flying south towards Kilnsea Wetlands. Panic! We ran back up out of the bushes to the bank top so we could see over the fields. For the next few minutes there was radio panic as everyone tried to find out what was happening. The bird went away from Mick and out of view without us seeing it. Shortly however, I picked up the bird coming back north, low down over Long Bank dyke. It looked really interesting! Guttingly my scope was in the car - Reg got on it straight away and announced that it had a really clean cut white collar with a dark boa to the rear. Through my bins I could make out plain apricot- orange underparts and darkish secondaries, but we were looking down on the bird which prevented us getting clear views of the underwing. The bird's jizz was not at all rakish like a Monties and looked quite broadwinged, despite being small and falcon like. I got on the radio and relayed it's movements as it headed off towards Easington. Mick and another birder got on it though more distantly than before as it moved north to Skeffling. Surely a Pallid! 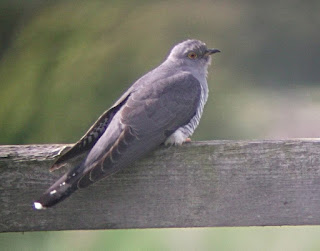 I went back to the car to get my scope just in case the bird returned, but sadly it didn't. Frustrating as without my scope and due to our angle I hadn't seen enough to clinch the bird, though it's apparent juvenile plumage and structure pointed firmly to Pallid. We staked out the Wood Warbler which eventually showed albeit briefly. Well worth the wait as these are such little crackers. It stood out like a white and yellow beacon in the tree it was in. A smart Cuckoo landed nearby too.


We next did the Triangle and saw a smart male Redstart. After a quick chat with Adam back at the Warren, we headed for the pub. Just along the road, a harrier suddenly banked up out of Clubley's - a Hen Harrier! So, a three harrier species day! We had a look near the Blue Bell after a tip off and found a smart White Wagtail along with 2 Whinchats and a load of Wheatears. The cold north wind was freezing us again, so we headed to the Crown for a well-earned pint. 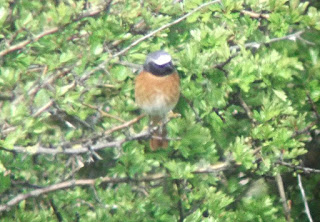 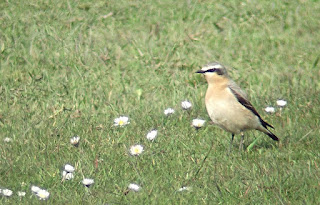 Post-script. A juvenile Pallid Harrier was reported Sunday morning from Spurn. Presumably the same bird lingering - let's hope the ID has been nailed!