Great views of the Spotted Flycatchers in the last week which are breeding at Askham Bog (see Tim's photo here). Besides this, and just as exciting, was the sound of a calling Lesser Spotted Woodpecker the other day. Typical, you spend ages looking for them and then when you least expect it, up one pops. I failed to see the bird sadly, which was calling in Near Wood near the edge of the main clearing, just east of the boardwalk.

The fen meadows are looking stunning at the moment and a fantastic tribute to the hard work of Yorkshire Wildlife Trust staff and volunteer group 'The Boardwalkers' over many years and supported by grazing animals in recently. The Northern Marsh Orchids, Common Spotted Orchids, Ragged Robin and Yellow Flag look phenomenal. Also 'showing well' are the magnificient Royal Ferns which tonight (Mid Summer's Day) will be producing their invisible flowers, so legend has it, and in the ditches the pale pink blooms of Water Violets, an incrediby rare flower, which is also flourishing at the Bog (photo below). 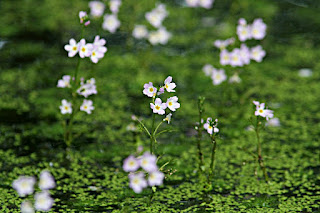 In the brief spell of hot weather yesterday, dragonflies appeared in droves and the air over the pond resounded to the titanic rattling clashes between territorial Four-spotted Chasers, one of which even saw off a young male Emperor furiously. On the edge of the battle ground, Common Blue and Large Red Damselflies fought their own more delicate battles, many successful males cavorting around with their mates in tandem.

Exciting news from the Bog is that despite appearances of the vegetation (no neatly grazed lawns on the pond edge) Water Voles have been seen. A big ol' Mink was photographed earlier in the year and we are fearful that this remnant vole population would have been clobbered.

We had a quick look at the Bee Orchid colony in the car park -  looking strange in immense circles of flattened grass, deliberately caused by photographers looking for that perfect shot - let's hope they don't do this in the Bog - and then headed west to Fairburn Ings.

A short drive later and we were watching a splendid adult White-winged Black Tern, my seventh in the UK, but a Yorkshire tick no less and the first adult I have seen for a few years. What a cracker this bird was. Sadly it spent much time perched very distantly, but at 8.30pm it got up to hawk for insects with the throng of Common Terns and Black-headed Gulls. A very distinctive bird as usual, wih noticeably long red legs even at long range. Structurally quite different looking to Black Tern, with much shorter bill and more rounded, broad wings, resulting in a less graceful aspect to its flight. Obviously features not really needed for such a striking bird, but very useful for picking out a juvenile in bad light. A very beautiful bird to watch. I managed a bit of pretty shoddy video and took a couple of grabs from it: 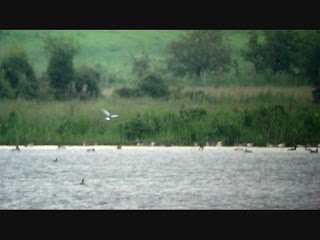 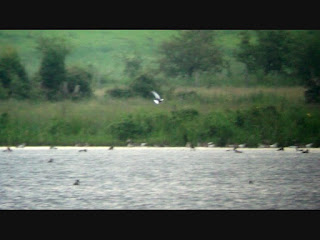