The last thing I expected on a dreary, calm early February day was news of a Great Skua at Wheldrake Ings! This is a mega record for the York area, with only four previous records published in YOC reports:

I also began to worry about the fact that at this time of year, the identity should be carefully scrutinised (if possible) to eliminate the mega rare South Polar Skua, and this could be an outside possibility. Either way, this was a bird I really wanted to see, so after a nail-biting few hours, I managed to escape work early and shot down there as quickly as a I could.

Fortunately, Craig Ralston had kept the Bonxie under observation, so within seconds I was watching the distant, but menacing dark form of a large skua sitting on the water near the 'Cormorant Trees' in front of Tower Hide. Fantastic! I legged it along the muddy riverside path to Tower Hide, just in time to see the skua fly off south - oh no!

To my delight, the gathering gull roost attracted the bird back in, scaring every gull on the ings in the process, all of which headed off down the valley. The skua landed on the water again in front of the hide. By now it was 4.40 and the light was starting to fail, particularly as it was fairly dreary. Tim Jones advised on the features I should look for to help with the identification but the poor light and distance made this very difficult. 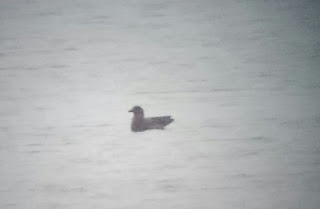 The Bonxie from Tower Hide.


The Bonxie got up and flew over to Storwood Ings, where it flushed a huge flock of Black-headed Gulls all of which panicked at this big dark menace heading straight for them. The bird landed on the flood in the distance and disappeared behind the bushes. A few minutes later, the skua got up again and flew straight towards me landing again in front of the hide. By now it was little more than a silhouette even though it was only c500m away. I wouldn't be adding much to the ID debate! I headed back to the bridge at dusk and met Gary Taylor who was watching the bird in the gathering gloom from there.

Later, I sent the excellent photos taken by the finder of the bird Trevor Walton to my old friend Dick Newell, large skua expert to see what he thought of the bird's identity. Here are Trevor's photos - I hope he doesn't mind me sharing them: 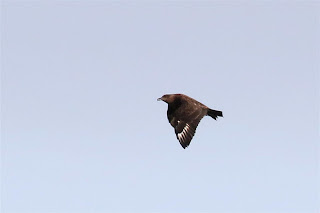 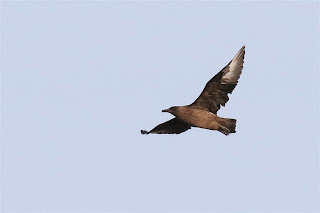 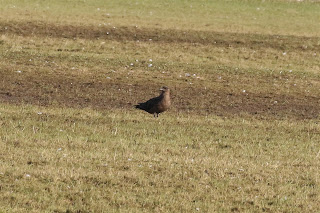 Photos of the Wheldrake Great Skua by Trevor Walton


"First impressions of your skua are Bonxie, and on closer inspection I think I can justify that.

It looks like the primary moult score is something north of 45, which would fit a Bonxie in its 3CY or older, or it would fit a 1st cycle (2CY) South Polar. The dark hood on the flying bird, the capped appearance of the perched bird, the nature of the streaking on the scapulars, the generally rufous appearance, the non compact structure (subjective feature when you have your eye in!) all point to Bonxie.
The lack of streaking on the wing coverts means it is probably a 3CY Bonxie at the end of its second moult cycle. An older bird would be streaked here.
It is well worth looking critically at any skua like this, it is now too long since those 3 South Polars turned up over 10 years ago."

So, Yorkshire twitchers could probably sleep easy, it was 'only' a Great Skua, but still a great record for the York area and one I certainly didn't expect to add to my York list in February! The bird moved to Swantail Ings and was present until dusk, so hopefully would be there in the morning.
Thanks to Trevor for finding the bird and reporting it to Craig and for Craig getting the news out so quickly and then helping me see the bird later.


Post script
The Bonxie did indeed roost and was still present on 5th February.