Spent the day walking up the stunning Whitendale Valley with the whole gang. It was a long walk for the kids, but the gradual ascent, fine weather and beautiful river to splash in helped with the trek. Birding was great at this slow pace, with my first Pied Flycatcher, a showy singing male, adding to the woodland chorus. Common Sandpipers skittered along the rapids, where Grey and Pied Wagtails chased about. No sign of any Dippers surprisingly. A bit further on, an unseen Cuckoo gave away his presence, calling forlornly. 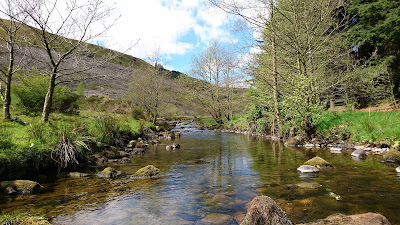 After a couple of hours with my stress-levels building, we took the last turn and Vicky kindly said I could rush on ahead. Typically, the first guy I asked said the male Pallid Harrier had flown off about twenty minutes previously. Atypically, whilst chatting to him, the bird came straight back in; I picked it up behind his head, coming back across the valley, against the blue sky.

It proceeded to float, ethereally, almost skimming the top of the heather as it hunted as if in slow motion. With the glorious May sunshine illuminating the vivid lime green of the Birch leaves amid the dark of the heath, the harrier floated slowly along. The harrier, rakish and svelte, paid us no heed as the birdo collective stared in admiration across the valley. It was unbelievably white, whiter than the previous male I had seen all those years ago at Elmley in Kent, when they were still, oh, so rare. Perhaps it was the purity of the upland air in the May sunshine, or the contrast with the deep mauve heather background. Either way, it was a dream-like moment. The black wingtip wedge was striking, seemingly made up of jet black 3rd to 5th primaries, with only a black tip on the second. The tail was lightly barred grey, and the upperparts flashed silver, mirror-like in the sun. 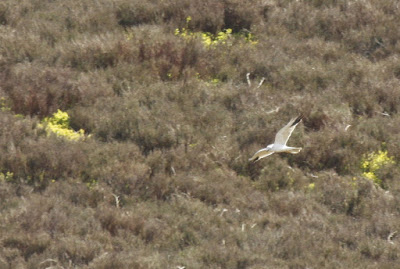 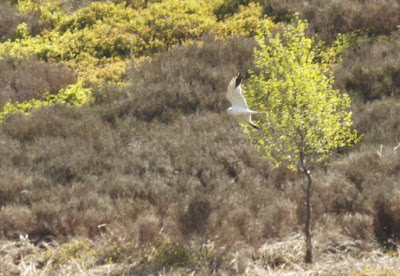 Shortly, the kids arrived and lunch was served. The gang were pretty hot - the only hats we had brought were woolly, and no sun block was to hand. Sunburn later perhaps. Mid-sandwiches and the harrier came back, carrying a long piece of bracken, almost looking almost like a tropicbird! It circled up over the hill, seemingly showing off to a nearby Buzzard. It eventually dropped in and settled on the bracken, allowing me to get the scope on it for the kids. 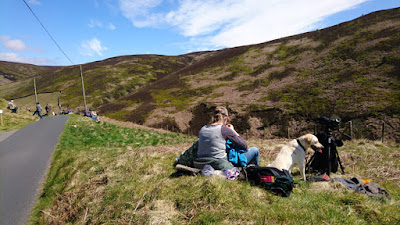 After a bit, the bird got up and flew around the valley for a while, did a bit of sky-dancing, including some epic stoops, before settling on a fence post to preen. 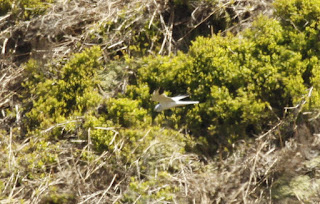 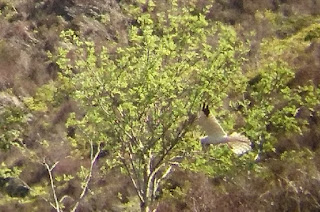 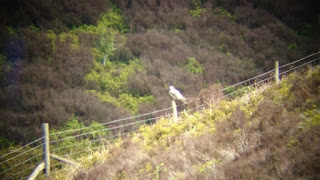 The family headed back down the road, after saying hello to fellow York birder Adam Hutt. I watched the bird cruising about for another half an hour or so. Also noted were a few Buzzards, two Peregrines, Sparrowhawk, Stonechats and a couple of Ravens.

I last saw the bird heading up the valley into the distance. What a privilege. 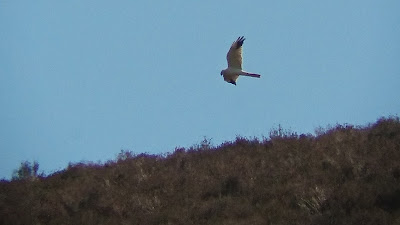 I walked down the hill with a birder from Accrington, which made me realise I had been 'over the border' for far too long; it was time to get a wriggle on. I caught up with the kids near the river and after a cool-off (it was proper baking) we had ice creams and then headed back to Yorkshire. 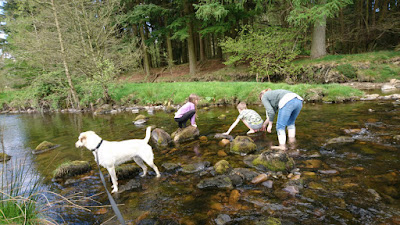