A taste of the autumn to come

Yesterday I had my first visit of the autumn to the Great White Cape. It has been predominantly westerly for the last few weeks apart from a Greenish-tinged day when it went east momentarily, so poor for the east coast, but great for seabirding on the west coast.

Yesterday, things changed and the winds went light and from the north with a bit of an easterly airflow across from Scandinavia, and this change certainly did the trick. I gave seawatching a go early doors, managing to be the one in eight who managed to miss the fly-by Sabine's Gull! Nevertheless, stacks of stuff was heading north, with flocks of Red-throated Divers heading south. About a dozen Sooty Shearwaters joined double that number of Manxies, plus several Bonxies, plenty of Arctic Skuas and lots of wildfowl. I headed off after an hour as the allure of the bushes was too strong. 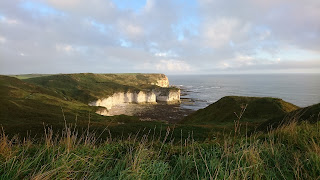 Early morning at Flamborough Head. Never get tired of this view...

Two Lesser Whitethroats and a Willow Warbler in the bushes by the lighthouse was a good start and gave early promise. The air was alive with Meadow Pipits, and flurries of Swallows flicked past. A Peregrine cruised over and a black-bellied Golden Plover flew around calling. Round the Outer Head to Old Fall where Craig and Lee instructed me on where the Yellow-browed Warbler - the first Flamborough bird of the autumn - was lurking. It called on cue from the southeast corner of the plantation but was elusive in the strengthening wind. It appeared briefly in the tops of the sycamores twice, before melting away, teasing us from the depths of the spinney with more calling. Little else of note during completion of the loop but an enjoyable morning nevertheless. Elsewhere, that hint of east dropped a fine selection on Fair Isle, an Arctic Warbler at Spurn, whilst Burnham Overy in Norfolk pulled in a Pallas's Grasshopper Warbler....More to come hopefully!