What is it about the 2nd January?

The 2nd January proved to be a pretty good day for local birding last year, when I found a Great White Egret at Wheldrake Ings. Today, I was lucky enough to have the day off work and my Mum and Dad agreed to entertain the kids in the afternoon, freeing me up to get down to Wheldrake.

The snow on the North York Moors had melted and the water levels had gone up in the valley meaning it wasn't so easy to get on to the Ings. Fortunately, Duncan had arranged to borrow some chest waders off Craig and so neoprened-up, we waded through the flooded car park to get on to the site. And boy, was it worth it! Wheldrake seems to be at it's best when the floods are coming up, possibly as invertebrate prey is in abundance. Today was no exception, with over 1,000 Lapwings and 300 skittish Golden Plover scattered across the ings. At least 1,000 Teal and the same of Wigeon meant game on for trying to find a Yank duck before the gulls started to arrive for the roost. We both spent a long time scanning through the hordes of loafing ducks and miraculously, the sun came out - briefly.

Despite a lot of effort, nothing was doing, and the antics of a hunting immature Peregrine was a welcome distraction, as it made repeated stoops at a lone Lapwing, which managed to repeatedly avoid being clobbered, along with a Wigeon and a Woodpigeon, which momentarily caught the falcon's eye. The gulls started to arrive, so we switched our attention to them, pausing as 20ish Whooper Swans came in from the south and pitched behind the willows on to the refuge. After satisfying myself there was nothing interesting in with the gulls, I turned my attention back to the ducks which had been stirred up by the Peregrine.

A bird with a large white flank spot caught my eye, but it turned head-on....hang on, yes, it's the American Wigeon! It was sleeping out the back towards Storwood, but sure enough it was the Yank! The bird had it's head tucked in, but was swimming rapidly, and after briefly thinking I'd lost it again, I managed to get Dunc on to it - phew! It then put it's head up and swam back the way it had come - cool! Sadly, it was too far for pics, and it soon went back to sleep. A good year tick! This will be the same bird present in December, which I don't think has been since the 12th, when it was on the river at Ellerton. It has also been seen down at Bubwith. Let's hope it is still around for the bird race on Sunday!

Back to the gulls, and a stack of Black-headeds and Common Gulls had now come in and we both started to go through them. Not so many large gulls were arriving, so despite the presence of Iceland and Glaucous Gulls over west, I decided to focus on the small stuff again. This proved a good move as after a bit I got lucky with a fine adult Mediterranean Gull hanging out at the back of the flock. I got Dunc on it and shortly it woke up and got it's head up, revealing that lovely heavy red bill. It had a decent amount of black on the mask and over the back of the head. It went back to sleep. Sadly, the light was failing and so my pics were dreadful - not for the first time! 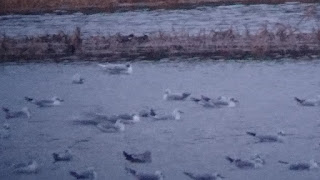 So, the 2nd January turned out to be a good day again. Not much else of note, save a Barn Owl flying across the field north of the lane on the way back.