After a quick look at Castle Howard (10 Mandarin, 6 Goosander, 1 Pink-footed Goose and a Marsh Tit!), I headed up to Wykeham to look for Goshawks. As soon as I got out of the car, an immature male and adult male were over the trees to the north sparring in the early morning light.

I spent the next three hours watching several birds circling around, occasionally sky-dancing, sparring with each other and generally putting on a great show. The adult male did a series of nine fast switchbacks across the valley before landing in full view in a bare larch, where he perched for about half an hour. On my side of the valley his mate, a rather large female, flirted with the young male, flapping around stiff-winged with puffed out white undertail coverts and a tightly closed tail. The young male was pushing his luck and shortly the adult male roared across the valley and chased him off, blazing across the tops of the trees. The young chancer wouldn't be back in a hurry! My phone broke and I could feel hyperthermia setting in, so I left the still displaying Goshawks and headed home. 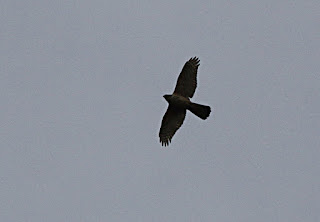 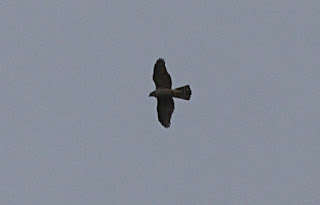