Out at stupid o'clock to do my first visit to my Turtle Dove survey square, north of Brandsby. Sadly, as I feared, it wasn't very suitable for them and I drew a blank. As I was up in the north of the York area I decided to go and see if last month's Wood Warbler was still around. Walking up through the woods, a fine male Redstart sang from the top-most twig of a tree in the dull morning light. 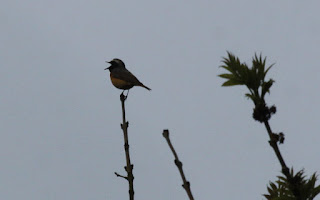 A little further on, the fizzing cascade of the Wood Warbler was audible, and I headed over to the spot. He was singing non-stop, mixing up the trill with a regular series of fluting notes, and parachuting around the slope. I sat on a tree stump and watched the bird for the next hour, pretty much mesmerised, as he floated around me, singing his head off and perching  within a few metres of me, seemingly unconcerned. Corking! 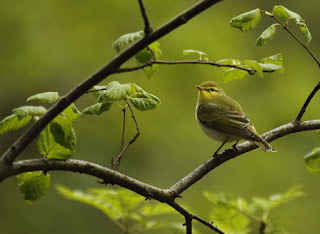 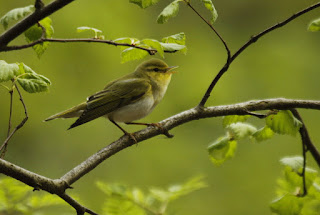 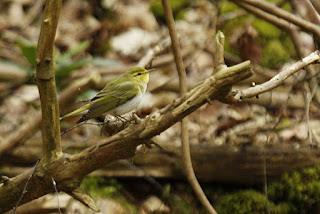 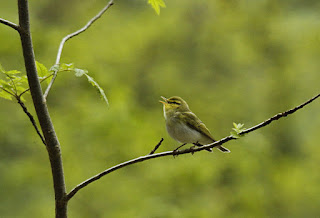 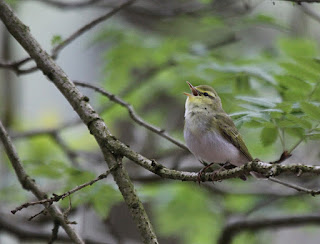 Headed back south to do some jobs and then on to North Duffield Carrs to have a listen for the Corncrake, which failed to perform for me on Thursday night. To my relief, this morning it was belting out its scratchy croak from the bank of Willowherb just to the right of the pool in front of the Geoff Smith Hide. It seemed to be within a dense patch of Willowherb, so it would be difficult to see......Within five minutes, one of the birders suddenly announced they could see it on the edge of the pool! Surely not! But yes, there it was, having a bath. Unbelievable scenes! After it finished bathing, it ran up the bank into the dense vegetation, disappearing without so much as a movement of a single plant. It resumed calling.

Seven Black-tailed Godwits were out on the ings, the water now receding rapidly. I continued my vigil while the other birders left and more arrived. Two West Yorkshire lads came in who were upset that they'd missed the performance, having been looking for it earlier without success. To their relief, I picked it up after a bit in the Willowherb and then we managed to follow it as it stealthily broke cover into the long grass, where it spent ten minutes just sitting and surveying the scene. Save to say there was a few choice West Yorkshire words aired, suggesting the lads were quite pleased! 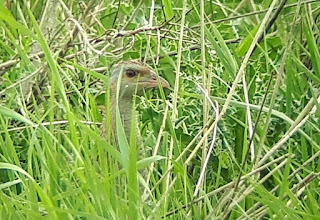 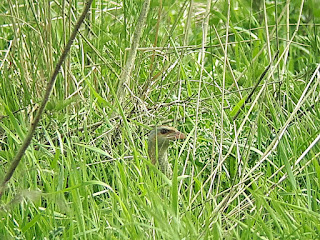 Land Rail, hiding in the grass.

To see a video comp, check it out on Youtube

Not a bad morning in the York area!