10 Years of Birdingdad Blog, and how times have changed!

I started this blog ten years ago following the birth of our daughter, Adelaide. Ten years have flown by and I am pleased that I have kept this going, an online diary of my nature exploits.

Thank you for reading this, I hope it has been as much fun for you to read, as it is for me to write! If you don't, then I don't mind, I enjoy looking back over my highs and lows of wildlife-watching and family life over the last decade. 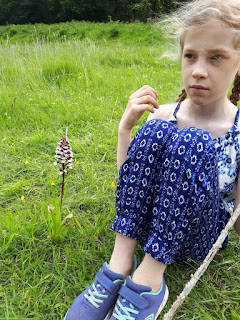 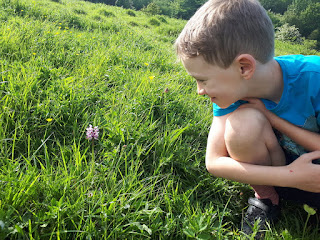 Our two kids. Addie was only a few months old when I started Birdingdad and Sol came along two years later. They have caused me no end of trouble, but no end of joy!


With the arrival of the kids, my life changed immeasurably- and mostly for the better! I am not quite sure what I did with all that time before they appeared. But along with my fantastic and incredibly patient and supportive wife, Vicky, the inspiration I get from wildlife has been a firm constant. I have continued to stumble forwards trying to learn about everything and anything, still making heaps of mistakes, but still loving every minute of it. A love of wildlife is a gift and a privilege and I feel sad for those who do not share this love. 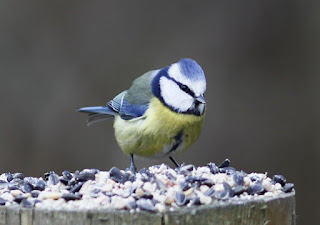 Blue Tit. One of the magical little birds that gave me the spark nearly forty years ago. I still enjoy seeing them.

Wildlife has also changed, as it does constantly. Species that were still pretty rare ten years ago, are now relatively common place, like Great Egret, Red Kite, Peregrines and Mediterranean Gull. Who would have thought that Spoonbills would be breeding side by side with Black-necked Grebes and Avocets in West Yorkshire? Amazing. 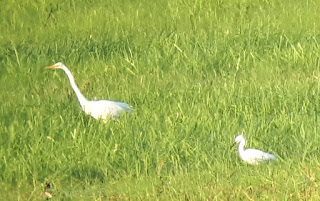 Great and Little Egret, side by side at Wheldrake Ings in May.

But there have been the declines too. Our Hen Harriers have been pretty much wiped out by the grouse-shooting fraternity. And one bird that is close to my heart, the Turtle Dove, is perilously close to being lost from our lands. A small population seems to be doing well in North Yorkshire, and is being studied and helped by Richard Baines, a friend of mine. Whether this will reverse the decline is unknown - let's sincerely hope so- but everywhere else, they have literally fallen off a cliff. So what better bird to illustrate ten years of my blog than some pics of a Turtle Dove? 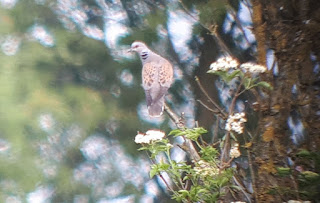 Saturday just gone, I had an afternoon off from Dad activities, so headed back to the forest to have another look at the Honey Buzzards. In three hours of not-so-quiet solitude (some very noisy birders present for a good part of the afternoon), I managed one male Goshawk cruising past and a good view of the pale male Honey, as he headed north towards Langdale End. He even gave a few wingclaps, as if waving goodbye.

I headed to a nearby site to look for Turtle Doves. Thinking back, I wouldn't have believed ten years ago that I would literally have to 'twitch' Turtle Doves. But this is what I was doing. On arrival, my heart leapt for joy as I could immediately hear the beautiful, calming purr of a Turtle Dove from a nearby copse. Unseen, I immersed myself in this almost forgotten sound. As a young birder, even in my 20s, this was a sound of summer, always enjoyable, but standard, nothing to get excited about. But now, I was mesmerised, though with an overwhelming feeling of melancholy.

Shortly, the bird flew out and landed distantly on a telegraph pole. I enjoyed scope views, only for it to be flushed by a fast-flying scimitar-shaped Hobby, that belted in after the Swallows in the farmyard. The dove beat a retreat, but thanks to the Hobby, soon appeared close-by, on an Elder bush, where I managed a couple of pics and a video. Enjoy! 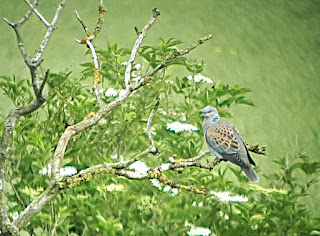