A Tale of Two Sand Plovers

Back in August 1991, I was about to hook up with my teenage birding mate, Dunc Poyser to catch the Shetland ferry at Aberdeen, for a trip to Fair Isle. We had completed out GCSEs a few weeks earlier and had been allowed to head up north to the fabled isle for some late summer birding. I was surprised to hear on Birdline that a Greater Sand Plover had been found on the Don Estuary, just north of Aberdeen earlier that day – get in! I met Dunc and his family at Aberdeen and told him the news. Fortunately, it didn’t take much to persuade Dunc’s Dad to drive us to the Don to look for it. Game on!

We found the site and a small group of local birders watching the bird. What a corker! In good plumage, the bird picked about on the mudflats by the river. We watched it at leisure, and I took a full description. This, about the eleventh GSP for Britain at the time, was a lifer for both of us and totally unexpected – a great start to the holiday! 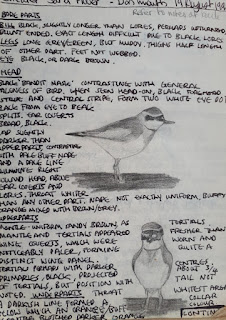 My original notes from August 1991. Note how short-billed the bird looks in my sketches... 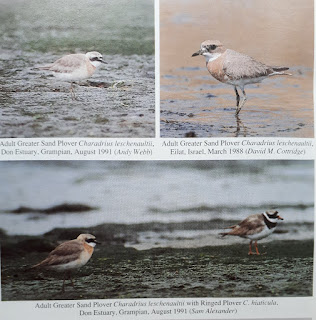 Above - Extract from Birding World 4:11, page 398. This article points out a number of anomalies with the identification, but in spite of these the authors concluded that the evidence pointed to Greater, rather than Lesser.

Fast-forward six years to 1997 and a Sand Plover at Pagham Harbour in West Sussex was identified as Britain’s first Lesser. I was away in Indonesia at the time so was unaware of the subsequent events. The tricky Don Estuary bird clearly was nagging away at the birding fraternity’s collective conscience and with better identification criteria having been established, the individual was re-assessed and judged to be Britain’s first Lesser, not a Greater as first thought. It is interesting to check back at my field notes from the time, see above…So, the tippex came out, and one Sand Plover was replaced with another. Ever since then, I have seen both species abroad, but never had a sniff of one in Blighty, despite both turning up.

Fast-forward another 20 years and my wife was away walking the Yorkshire Three Peaks with some friends and I was left in charge of the dog and the kids. Firstly, an Audouin’s Gull rocked up in Sheffield of all places, on the Friday evening. I had no chance of getting there – at least it wasn’t a British tick for me, but it would have filled a nice gap on my Yorkshire list. It wasn’t to be, and despite considering my options for the Saturday, it did a bunk. Next up, a Greater Sand Plover was found by the Little Tern wardens on the beach as Easington! No Way! I couldn’t believe having missed the Squacco a couple of weeks ago by being tied up with a training course, I was looking at missing this bird too, being tied up with Dad duties and not thinking it fair to drag the kids all the way to Easington to see a wader. After a lot of soul searching, I decided to do the right thing and took the kids to the beach at Scarborough. The kids played in the sand, the dog swam about in the sea and I tried to suppress any thoughts of Sand Plovers a little way to the south. News of it flying off late morning reinforced my belief that I had done the right thing….but then it came back! Drat. However, I had happy kids and an exhausted wet dog – gold star for birding Dad! After filling our faces with candy floss and pop, we headed back early to York to pick up their Mum and attend a friend’s BBQ – oh, and watch the World Cup Final. .

Crippling photos of the GSP started coming through on Twitter, as many friends made the journey to see this mega Yorkshire bird. And what a handsome beast it seemed to be! By late afternoon it suddenly occurred to me that I could twitch it after the match. I messaged a few York birding mates and Dunc Bye was up for it. Game on #2.

The often painfully-slow journey east to Spurn was not bad at all, presumably as most people were relaxing after watching the World Cup Final, rather than driving around the county like lunatics. We arrived at Seaside Road and began the long trudge south along the beach towards Beacon Ponds. The line of birders in the distance gradually came closer and after what seemed like forever, we arrived. 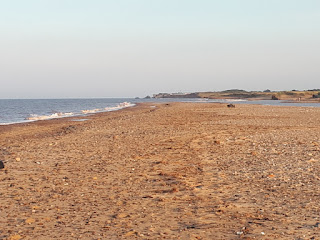 Within a few tense moments, I got my scope on to the big plover, which was scurrying about on the shingle in front of a large Dunlin roost. It was c500m away, so not the kind of views people had had earlier on, but it was still pretty good through the scope in the evening sunshine – get in! Greater Sand Plover finally makes it back on to my British list 27 years after I had rubbed it out! 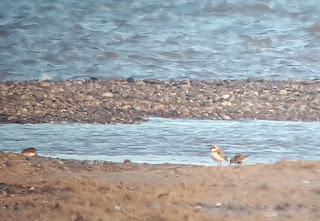 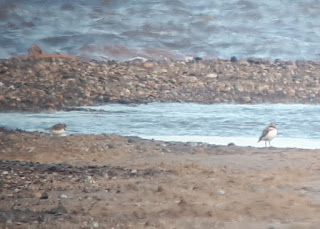 The bird was very active, running around with a few feeding Dunlin and Ringed Plovers, mostly on the edge of a tidal pool. Nearby birders speculated that it might decide to return north up the beach like it had done the previous evening, but sadly, it did not. We watched if for half an hour or so, and then decided we should head back, job done. Plenty of Little Terns were flying about noisily, let’s hope they have had a good breeding season here. Family groups of Sandwich Terns were heading south along the coast calling excitedly, a sign of the autumn to come.
...
Below are three photos of a bird at KM20 north of Eilat in March this year. 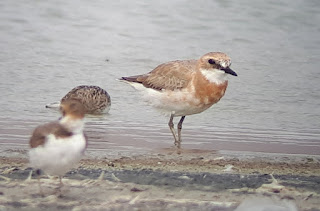 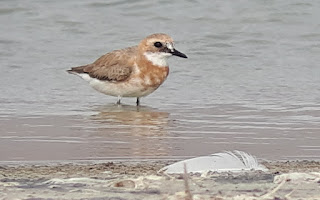 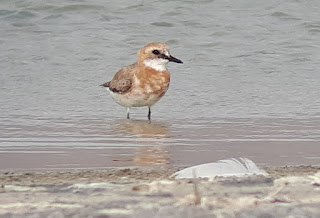