I never thought I would write a blog post about twitching a Beluga.

The possibility of seeing one of these white Arctic whales in UK waters was simply unimaginable, so when one was found happily swimming about in the Thames Estuary near Gravesend by Dave Anderson (@Ipterodroma), I could not believe it, but the video on his ecstatic tweet was unequivocal. A Beluga in the Thames. Amazing!

Now, Gravesend is a long way from York, and it was the middle of the working week. My mind whirred. I had long dreamed of seeing this unique species, but a trip to the St Lawrence River or Hudson Bay in Canada was really out of reach for me, at least in the near future. So, to get a chance of seeing one four hours from home was very exciting and too good an opportunity to miss.

By the evening, a selection of people I know had twitched it and by all accounts the whale was not some hopeless, moribund case like the Northern Bottlenose Whale that sadly died up the Thames a few years ago. An estuarine species, Belugas are very capable of navigating around cloudy river waters, using their pronounced echolocation system to find food. This whale, despite being a long way from home, seemed to be very active, feeding normally and swimming up and down a stretch of the Thames, commuting between Gravesend and Tilbury in Essex. I would not have been as keen to see this animal if it was at death's door, but as this was not the case, I hatched a plan. My old Mark Hawkes from Cambridgeshire was keen to go too, but we decided we'd wait on news, as it would be a long trek.

Shortly before seven the next morning, the news came that there was no sign of the Beluga despite near perfect viewing conditions. Nevermind, it looked like it was not to be after all. I messaged Mark and we both went to work, although I packed my gear - just in case!

Then, at 9.12am a tweet announced that it was back! I messaged Mark, said I'd be round his by midday, organised friends to pick up the kids, sorted out a dog walker and then got permission from my boss to have an emergency day off. Fire up the Quattro!

Five hours later, Mark and me arrived in Gravesend under a sky the colour of Marsh Gentians, warmed by balmy autumnal sunshine. We had struggled to get recent gen on the Beluga's whereabouts but took a punt on crossing the river to the Kent side; at least the light would be behind us, making viewing easier. As we approached Gravesend, a tweet from an acquaintance confirmed this was the right choice: the Beluga was still showing! Superb! We were getting close.

Down Mark Lane to the back of the Gravesend docks, park the car and out on to the riverbank path. Out of the car, gear on, I clipped a kerb and went sprawling face-first on to the concrete. My scope whacked me on the back of the head as my knees simultaneously hit gravelly concrete, in a huge clatter of optics and flesh. Two big holes tore in my jeans and searing pain shot down my right leg, along with a stream of blood; my right wrist twisted and grazed along the floor, and people came rushing over to see if I was ok. I think Mark struggled to hold back the giggles!

Untangling myself from a web of straps, and peeling myself off the concrete, the adrenaline coursing through my body got me over the pain in an instant - we had a Beluga to see! I limped off down the path, the nearby landlord of the Ship and Lobster pub shouting "It's a 20 minute walk, lads" in broadest cockney into the dust we left in our wake. My knee was killing. Scanning through the bins, I could see a crowd of people gathered on the shore about 2KM away. Cripes!

I suggested we maybe try and catch one of the nearby ponies that were grazing the riverbank to ride down the shoreline. Mark wasn't keen, so I limped on.

What seemed an eternity later, but was probably 15 minutes, we stopped for a scan, and the shining white body of the Beluga broke the surface, glinting in the afternoon sun. Beluga!!!!!!

The pain vanished, and we scampered on down to the crowd. Within minutes, the whale casually surfaced again, about 500m out in the river. Wow! It blew as the round melon-shaped head broke the surface and a beady eye peeped out of the river, just above a stubby little beak. Three more breaths and the whale dived, with a slightly more arched tail stock.

Five minutes later, and the Beluga surfaced again, this time really close, only 100m out. Incredible! Mark nailed it with his phone through his scope - awesome work! This was just stunning. The Beluga seemed to be feeding around the large moored barges. It would breath three to five times in succession, sometimes covering barely any distance, other times, actively moving  twenty or thirty metres between breaths. It would then dive and stay down for three to five minutes. Often it would stay in the same general area for several series of breaths and dives, but then moved on and would reappear a way away. Some absolutely massive ships came out of the docks and headed east down the river in the shipping channel, but the Beluga stayed well away, keeping much closer in to the side out of harm's way. Nearby, a rib from the British Divers Marine Life Rescue kept a watchful eye on proceedings, ensuring nothing untoward happened. Nobody seemed intent on coming to look in a boat, so they could relax and enjoy the spectacle themselves.

A good crowd had gathered, many were birders, but plenty of  'normal' people too, keen to see this intrepid traveller for themselves. Here and there, film crews jostled for position and pestered onlookers for interviews. Meanwhile, the Beluga didn't notice, and happily carried on doing its thing.

After a couple of hours of soaking up this once-in-a-lifetime experience, we bade farewell to this long-distance traveller that had provided so much excitement and enjoyment and wished it well, hoping it may find its way back north, if indeed that was its desire. 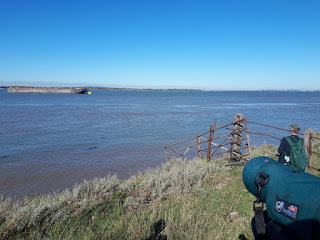 The view from Gravesend towards one of the barges. 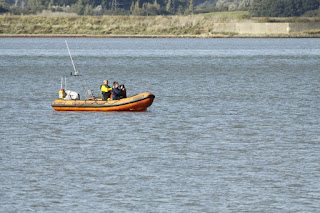 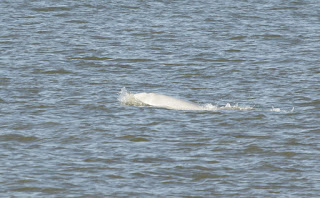 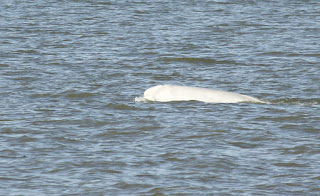 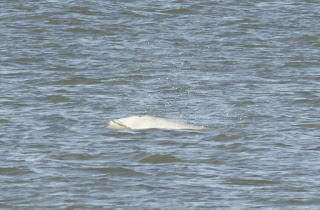 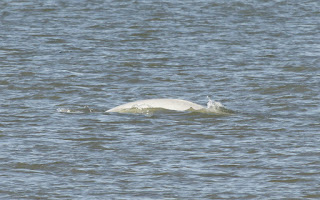 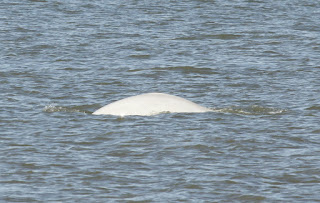