There's something cool and just a bit menacing about Pomarine Skuas. Like a large, more powerful version of an Arctic Skua, they are notorious for being the skua that will go for the bird rather than steal its food. I have seen plenty of Poms in my time, mostly flying past east coast headlands in stormy October northeasterlies, or cruising past the Outer Hebrides on their spring migration back to the Arctic (see here) and they always inspire an awe and just a touch of menace.

Skuas of all four species begin their southbound migration in August, and sometimes they may linger for a while along the coast if the feeding is good. A little over a week ago, a Pomarine Skua was found on the beach at South Gare, on the south bank of the River Tees' mouth and proceeded to hang out stealing fish scraps from the local anglers, and occasionally having a pop at the loafing terns. With a fairly free Saturday to play with and westerlies meaning few migrants would be on the east coast (ignoring the Icterine Warbler at Flamborough of course!), I decided to head north to pay homage to the Pom. I picked up Rich and headed up there, racing ahead of the rain band spreading in from the southwest.

The bird was present on arrival, loafing on the beach, completely unconcerned by the nearby presence of birders. After a bit it got up and flew about, attracted to the activities of the anglers on the seawall. As it cruised back along the beach it caused utter mayhem among the roosting gulls and waders, and attracted a steady stream of angry parent terns that noisily divebombed the skua, trying to keep it away from their young. With a heavy spotted breastband and flank markings, I suspect this is a female, and with plain dark underwing coverts, seemingly an adult. She had pretty good spoons, but certainly not as impressive as the spring males I have seen. Despite the ever-present menace, she was pretty chilled and didn't seem that interested in murderous pursuits. If I was a young tern, I would certainly take no chances though! 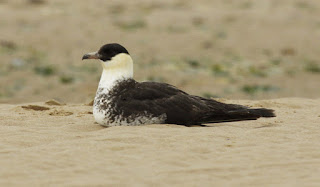 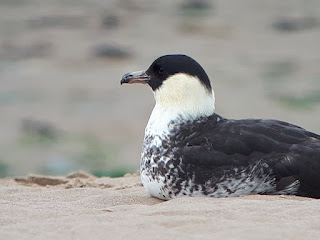 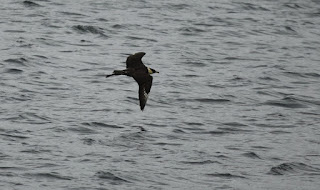 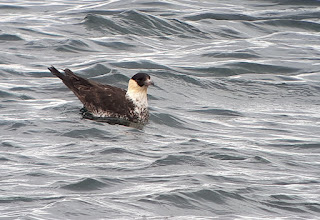 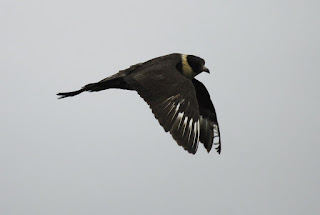 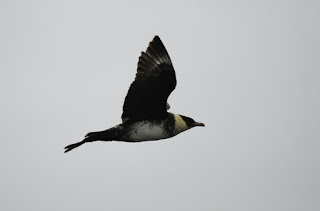 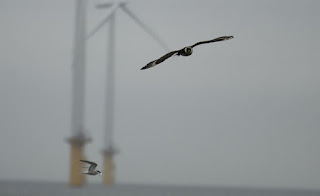 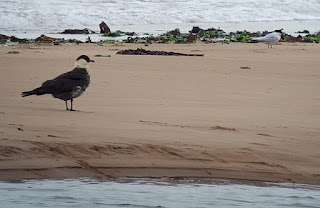 Mrs Spoons. At the bottom, eyeing up an adult Roseate Tern standing on the tideline.