Following my op before Christmas, the pain relief finally seemed to be getting the upper hand yesterday, so I asked Vicky to drop me at Wheldrake Ings for a few hours (I am still unable to drive). It was such a relief to be outside after being cooped up for the past ten days or so. The conditions were comfortably clement as I slowly made my way down the riverside path. Squadrons of Lapwings headed over towards the teeming throng on the water's edge in the distance, while noisy gaggles of Greylags lifted off clumsily to head on to the Low Grounds. The flood, which has extended a little since my last visit, was peppered with ducks, thousands of them and the air was full of the whistles of drake Wigeon and the musical piping of Teal. 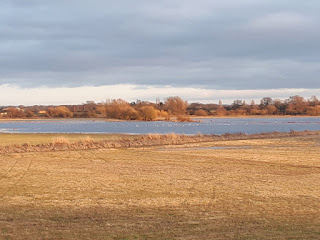 I spent the next couple of hours enjoying the sights and sounds from Tower Hide, carefully checking through the ducks for a rarity, switching to the growing gull roost as dusk began to creep along the ditches, spreading out across the meadows. Nothing unusual reared its head, despite my perseverance, although three Black-tailed Godwits were nice among a mixed flock of Ruff, Dunlin, Golden Plovers and Lapwings. A Peregrine surveyed the scene from a lofty perch atop a Willow along the Canal and caused panic when she decided to have a fly around.

As I walked back, a tight flock of yapping, dark geese headed over the main meadow and descended on to the Low Grounds, presumably to roost. White-fronts; a group that has been hanging around for a week or so now. The sunset was gorgeous, glowing gently in the silky surface of the Derwent as it meandered through the Willows on the edge of the reserve. 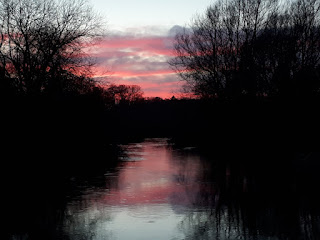 With moderate flooding in the Lower Derwent Valley, the area really is now at its best,  with thousands of wildfowl thronging the shallow waters on the ings, countless waders and always the chance of a rarity of two. Stunning stuff. Hopefully I will be fully mobile soon so I can get out and about more widely.
at December 31, 2018