A 30 year old Sanderling? Well, not quite! After a lovely morning in Wykeham Forest buzzing with displaying Goshawks, a Peregrine and a surprise female Marsh Harrier that flew west, I had a late afternoon twitch to North Duffield Carrs for a Sanderling. 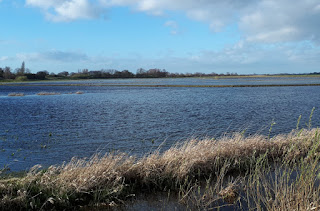 Yes, I know, Sanderlings are a common (but always lovely) sight on the Yorkshire coast, but birding is all about the context, and they are scarce in the York area, so this was a much-desired York tick for me (or so I thought). The little wader was hanging out with a Dunlin (smaller and browner than the Sanderling) on some VERY distant muddy mounds, which enabled a good comparison through the scope. Plenty of ducks were still present, but no sign of the Grey Plover reported earlier. 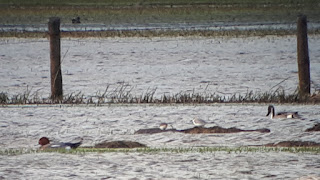 After enjoying distant views of this tiny white sprite, I headed home very pleased with my success. Later, I messaged my old Bish birding mate, Dunc Poyser about my Sanderling sighting, and he replied to say that we had seen one together at Wheldrake Ings in April 1989, near enough 30 years ago! So, not my first in the York area after all. Given waders live a LONG time, this could conceivably the same bird, but I guess that is highly unlikely, but you just never know.

Poring over my old notebooks was quite a revelation. I discovered that what I thought was my first York Little Gull last spring, was in fact my eighth! Wow, my memory is really getting bad! Even more bizarre, I apparently saw the second-summer Shag that spent a couple of months at Wheldrake, also in 1989. And Shags are really rare in the York area with only about nine records. I have no recollection of seeing this bird, but Dunc corroborated this too, although only because it was in his notebook.