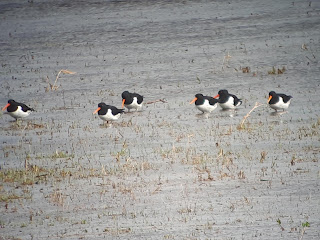 With dreadful weather forecast, our planned venue for Sunday's field trip, Wykeham Forest, was ditched and we decided to head down to the Lower Derwent Valley, where at least we could take shelter in the hides if things got too bad...

Five intrepid souls met me in Piccadilly at 8am. It was already raining! We met Duncan at Bank Island, noted a Little Egret, and then headed out to do a clockwise loop of the LDV.

Our first stop was East Cottingwith, where we were able to scan the refuge at Wheldrake Ings. Plenty of ducks and Coot about, along with several Black-tailed Godwits. Intriguingly, a bird called distantly; I barely heard it but someone suggested Whooper Swan. Ears tuned in, it called again, and it was clear it was a Crane! Excellent. We walked down the Pocklington Canal in the direction of the sound, hoping the bird, or birds, would be on the ings towards Storwood. There were certainly plenty of birds on the flooded fields, and several Goldeneye on the canal. but sadly no Cranes. Two pairs of Willow Tits were wheezing in the willows, always nice to see/hear, and an adult Peregrine showed briefly.

The rain was increasing, so we turned tail and headed to Ellerton Church. We were foiled here, both by the lack of flooding and also by a guy exercising his two labradors on the ings = no birds. A Barn Owl by the church was the only bird of note.

A similar story unravelled at Aughton, with little flooding meaning few birds, besides a few rather damp looking Lapwings huddling out of the wind.

Bubwith and North Duffield Carrs held more water and therefore more promise. The rain was really getting heavy and the wind strengthening, so we welcomed the shelter of Garganey Hide. The wind had blown down a tree, blocking our path. I limboed underneath it, but some quick thinking by Neil and Noel removed the blockage and allowed the rest of the gang to pass by unhindered. Another Peregrine, an immature was sitting gloomily on the grass whilst a Buzzard sat stoically atop the Osprey platform, facing the gale. Shelducks joined good numbers of Pintail, displaying Teal and a scatter of Wigeon and Shovelers. The arable field behind the hide held a decent flock of Golden Plovers, Lapwings and Dunlin. A cuppa and a sandwich were enjoyed. To our surprise, by the time we had walked back to the car park, the rain had stopped and we could even see some blue sky!

A brief stop at Thorganby revealed a small skein of 20 Pink-footed Geese grazing on the ings; they soon flew onto the river.

Completing the loop, we arrived back at Wheldrake and headed down to the Andy Booth/Tower Hide. The sun came out! The wind was now pretty gusty, but the newly-boarded hide was cosy, and we enjoyed a good stint checking through the ducks. A Goosander flew along the canal and a piping piebald party of seapies (Oystercatchers) pitched in, looking splendid in their spring finery in the March sun.

Our brave party began to split up early afternoon, as hail storms pelted us from a blackened sky, followed by dazzling sunny spells. Few birds were added hereafter to the list, but an enjoyable day was had all told. Big thanks to Peter, Duncan, Noel, Neil, Alan and Bob who braved the weather and provided great company.

Post-script
Today, two Cranes were discovered in a field at East Cottingwith. A coincidence? Maybe...