Old Red Eyes and the Spaniard

I have had the busiest week, with the launch of Ripon City Wetlands on Wednesday and various other things going on with work. It's not over yet, as we throw open the gates at RCW tomorrow and I am lined up for a series of guided walks. Not the worst job in the world though, I have to admit. 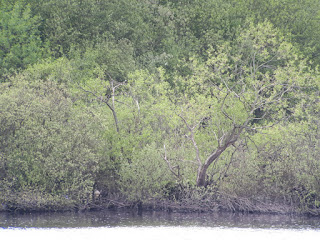 Night Heron by the water's edge.


I decided to leave work early afternoon to catch up on a bit of lieu time and this worked out well. Firstly, I paid the (Black-crowned) Night Heron a visit at Fairburn Ings. Dodging the showers, I watched this lovely little heron from Charlie's Bridge whilst it chilled out on the large island off the village, occasionally preening. I love Night Herons with their immaculate black, white and grey plumage, topped off by two great white plumes on the rear of the head, sprouting like a forked antenna. I am always entranced by Night Herons' ruby-red eyes, glowing like coals in a rather gentle face. 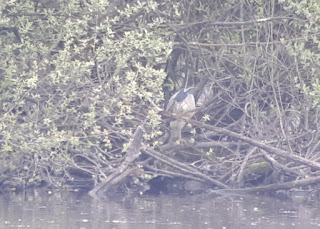 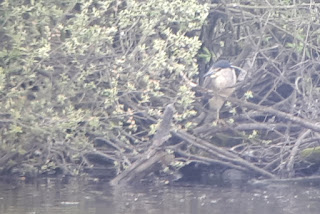 
Across the water a multitude of martins, swallows and swifts pelted after water-hatched insects as the clouds built angrily overhead. Sadly, I didn't jam any Arctic Terns; all those hawking for insects over the lake were Common Terns. I decided I should do a bit of reconnaissance for our impending bird race (on the 11th), so I headed up the Aire to the visitor centre. However, I suddenly remembered about the Iberian Chiffchaff just down the road at South Kirkby, so I immediately turned round and shot south.

I arrived at the end of Carr Lane and heard a Cuckoo calling from the scrub - perhaps a good omen! I picked myself through the puddles, dog crap and litter and up the slope, surrounded in the vivid green hawthorns by the sound of Willow Warblers and Blackcaps. The rain had lifted and things were brightening up. I strained for the sound of an unfamiliar warbler, that up to now I had only heard online. Shortly, the distinctive, three-part song came loud and clear from a nearby tree. Fab! But I couldn't see it - how frustrating. The bird sang three times and then was gone. Ten minutes later and I heard the song again, back down the hill. Sneaky thing! 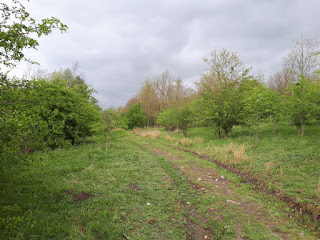 
I crept down the bank as the Iberian Chiffchaff continued to sing. After a few minutes it flew towards me and landed nearby in a Ash tree allowing me to finally see it. For the next minute or so, it perched out in the open, singing it's heart out. A very subtle bird, though with a nice lemony-wash on the face and supercilium and under the tail, along with brighter green upperparts and little in the way of an eyering like you would expect on a standard Chiffchaff. The bill looked long as did the wings, but still a very subtle bird which I would probably struggle with if silent! 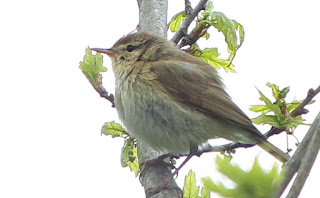 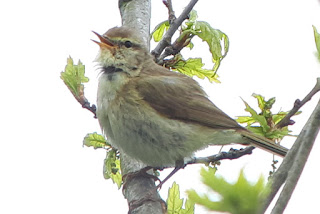 A Common Chiffchaff nearby seemed to be giving his Spanish cousin some grief and moved it on quickly. Another birder turned up and together we birded the hillside, eventually refinding the IC, singing from his favourite trees. A rather unassuming yet educational bird.

A Cuckoo flew past just before I escaped the gathering rainstorm and headed back north.
at May 03, 2019