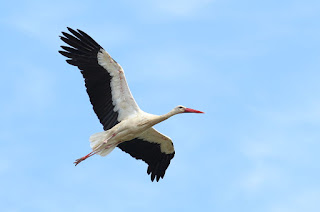 The reintroduction of White Storks at the Knepp Estate in West Sussex has been grabbing the headlines in recent weeks, see here and here.

Knepp is well-known for (re)wilding and is an exemplar of what can be achieved by allowing natural processes to return. The impact on biodiversity of the Knepp project has been huge and Knepp has become a leading light for other estate and landowners to follow.

Knepp's latest venture, to 'reintroduce' White Storks is a little troubling to me and feels like an attempt to secure a USP that will generate publicity and income. I don't have a problem with that per se, as the owners of Knepp have to bring in income to support their estate and to pay their bills, but from a nature conservation point of view, the arguments seem weak. Why should I care? Well, this is important as conservationists must maintain their integrity and our work as a movement must stand up to close scrutiny.

The reasons for my troubled feelings are as follows: Firstly, White Storks are not under threat (IUCN Least Concern), so why put effort into this species? Well, perhaps it is because they are big, showy and attractive - easy to for visitors to spot and don't really create any enemies in the wider landscape. They build massive great nests and seem to be happy living alongside people.

Second, and perhaps the main contention in my mind is that they were never really part of our native avifauna. Sure, storks turn up each year as overshoots on their return spring migration from Africa, but did they ever breed here regularly?

The oft-cited record of a pair on St. Giles Cathedral in Edinburgh in 1416 supports the point. If storks had been a common part of the scene, this record would not have been that special and would have long been forgotten. This must have been a remarkable, possibly unique record at the time, suggesting that storks had not nested in the UK at least in spoken history at that time. Other quoted evidence is the connection in place names. This is also seems dubious; historians have stated that in the early part of the last millennium, there was little differentiation in the names of long-legged wetland species and references to storks could well have been to herons or egrets. Therefore, place names linked to storks may be a red herring, as they could have been named after the local herons. An example of this is near my local patch, Wheldrake Ings. Adjacent to the Ings on higher land, is Storwood, presumably named after the presence of 'storks'. But look closer and it seems strange that on the other side of the ings, again on slightly higher ground is a large heronry, in a wood, which thrives to this day. No storks, Grey Herons (and recently Little Egrets!). Records of heronries in this area go back to the early 1400s, a similar time to the Edinburgh White Stork nest. But there are no records of White Storks at Storwood or anywhere in the Lower Derwent Valley area. Now, if people recognised the White Storks at Edinburgh, surely they would have identified them if they were in the Lower Derwent Valley too? So to me, the name Storwood is far more likely to refer to the Grey Herons nesting in the wood than to the presence of storks. And the same could be true of other place names linked to storks.

Sadly for White Storks, like virtually everything else, they were included in feast menus, records of which were often meticulously kept. However, written analyses of these accounts have found it hard to prove the source of the birds and other animals provided at these lavish banquets. Storks may well have been imported from the continent for food. Mediaeval feast records from the LDV area reference Spoonbills, Grey Herons and Bitterns, but no White Storks.

My last point is linked to folklore. Across the native range of White Storks, there are many cultural references to White Storks. Even us Brits all know the folktale of White Storks carrying babies in their beaks! And this is partly due to the previously mentioned close ties to people. Storks benefitted from woodland clearance for agriculture and exploited buildings as nesting sites, something that was often actively encouraged, as storks were seen as omens of good luck in many places. I could go on, but a quick internet search will show you all the cultural references. So if White Storks were widespread in Britain, why are there no such similar references in British folklore?

I am therefore surprised that Natural England licensed this project as a 'reintroduction' when the evidence of White Storks being anything other than a scarce spring overshoot is scant. Nevertheless, in a climate where wildlife needs every bit of help it can get and as many advocates as possible, maybe the bigger picture shouldn't be ignored. If the presence of storks inspires people to get into nature or at least appreciate it a little more, then it is a good thing I guess. I applaud Knepp for their ambition, it could even lead to a Victorian-esque game of oneupmanship among the large estates, all vying to have the wildest estate, and hopefully the habitats and less sexy species will benefit on the back of the storks - carried in their beaks perhaps... So, good luck Knepp, I hope your project works, but just be a little more honest in your narrative!