Redneck and the Great Creak

After a week in Derbyshire with no birds and a handful of moths, I had a few hours to kill today (Saturday 1st June). After finishing my jobs, I decided to go to Wykeham to have a look for the Honey Buzzards. Sadly, I was defeated by rain and traffic on the A64, so I  span round and headed west instead, to Fairburn Ings.

The diminutive Red-necked Phalarope, a relatively drab male, was watched from the roadside platform swimming about around the islands in the main bay. A typical late spring migrant it was incredible to think this bird could have spent the winter off the Peruvian coast, before heading back across the Central American isthmus, over the Atlantic to Fairburn Ings, West Yorkshire! I watched the bird which stayed close in to one of the islands, occasionally spinning around to stir up critters. The Avocets nesting on the islands had a few chicks and two migrant Dunlins were also present.

Redneck. Always against the light so not great for phonescoping.

Next up, I decided to head down to Wintersett to have a look for the Great Reed Warbler. 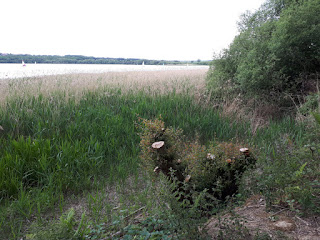 The giant Acro was audible on arrival clanking and creaking away in its favoured reedbed. After a bit, I managed to pick the bird up, sitting close to the water's edge on swaying reed stems, singing away. His song seemed a little half-hearted; perhaps he realised there were no female Great Reed Warblers at Wintersett. 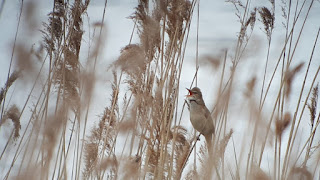 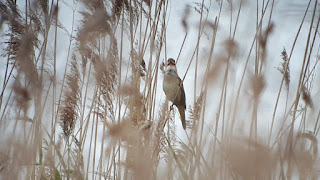 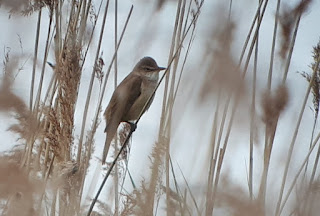 Great Reed Warbler. My first in Britain since one at Paxton Pits in 2016 (see here) and my first in Yorkshire since 5th May 1990 which I watched in a ditch at Sammy's Point, Spurn.

...
Two Hobbies were catching damselflies, of which there had been an immense emergence and I heard and saw a Cetti's Warbler.

...
I finished the day on a Yorkshire heath listening to Nightjars churr. Gorgeous!