Spent just over a week on family hols between Anglesey and Snowdonia, North Wales. With some gen from Marc Hughes @marcbuzzard I managed to steal a bit of time mainly to do some pre-breakfast seawatching at Point Lynas on the northeast tip of Anglesey. 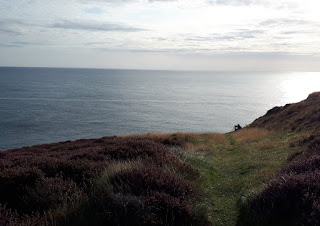 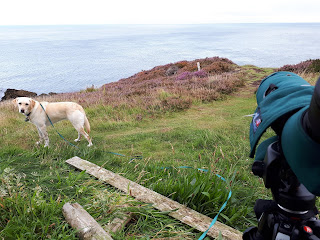 Seawatching proved to be fantastic with the highlight being a pod of Risso's Dolphins seen on two out of four visits, at one point joining the resident pods of Harbour Porpoises feeding close in off the head, giving superb views. I wished I had taken my DSLR as I would have got some good pics, but it was very difficult to phonescope, and I failed miserably. This pic is borrowed from Flickr Creative Commons, but is in the exact pose of one of the individuals I saw on the 22nd, which surfaced right in my scope! Lunar who joined me for seawatching seemed quite intrigued by the sounds of the dolphins and porpoises blowing offshore! 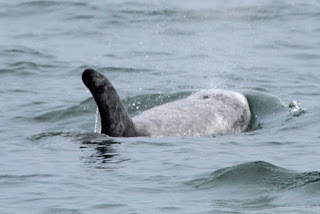 Risso's Dolphin. Pods of five and three seen from Point Lynas on 21st and 22nd August.

Large numbers of Manx Shearwaters, Kittiwakes, terns and gannets were a constant feature, along with several Arctic Skuas and a couple of Bonxies, plus small numbers of Whimbrel and Common Scoters moving. Choughs fed quietly in the horse paddocks on the way up to the lighthouse, and a Peregrine was knocking about. Elsewhere, I checked out Dulas Estuary, which revealed a fine adult Mediterranean Gull among the commoner brethren, plenty of common waders, including a smart Grey Plover, and a couple of Greenshank. 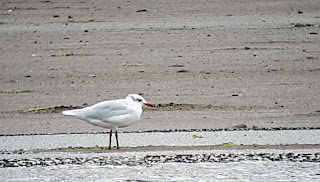 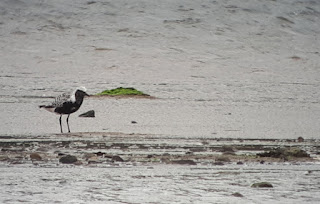 On the 22nd August we spent a couple of hours on the beach at Traeth Lligwy, where I discovered a large tern roost. Among the c300 Common Terns were quite a few adult and juvenile Arctics, several Sandwich Terns, and best of all, two adult Roseate Terns. Both birds were ringed, one being still in breeding plumage with a reddish bill base and almost full black hood, with the other bird sporting a white forehead and a black bill. Frustratingly - for the terns as well as me  - the flock was regularly flushed by dog walkers, but this did mean I got to hear the Roseates' calls, a clear Spotted Redshank-like 'chew-wick', which stood out from the raucous cacophony of the flock. 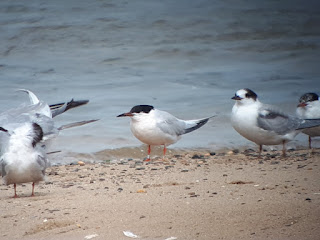 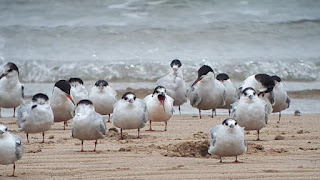 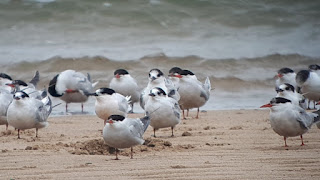 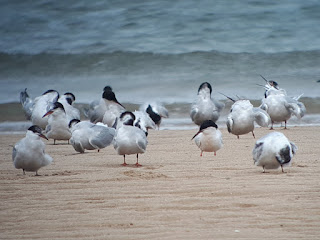