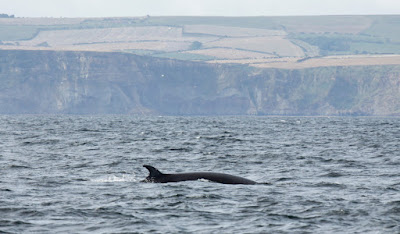 Following a run of trips cancelled due to poor sea conditions, I was delighted that today's Yorkshire Coast Nature Seabird and Whale trip was going ahead. We had decided to cancel at the end of last week as the forecast looked bad, but over the weekend, it improved markedly and as I passed Sandsend this morning, the sea looked very promising. Game on!

Rich had had a couple of great tours last week, preceded by Mark's epic adventure when he recorded our first Cory's Shearwater (see here) plus the first Balearic Shearwater of the season. The Minke Whales had arrived in numbers, so, with a good sea, it was shaping up to be a great day. And so it proved!

Spotting a large wheeling flock of Gannets, we cruised over, about 2 miles out from Staithes Harbour and within minutes I picked up our first whale - which blew strongly several times! This is unusual for a Minke and for a while we were very hopeful this could be something bigger, but as with last year's possible Sei/Humpback/Fin, we never did pin it down. Presumably just a Minke behaving oddly. Within a few minutes we were surrounded by impressive Minke Whales, feeding around a spawning shoal of Herring. Mackerel were in on the act too, in turn attracting the Gannets. Manx Shearwaters joined the frenzy along with commoner Fulmars and Gannets. The smell of the Minke's exhaled breath, the 'blow' could be smelt on the wind - smelly cabbage! They really are Stinky Minkes! It was hard to know which way to look, as whales surfaced all around, sometimes right next to the boat.

Surfacing profile of a Minke Whale

We gave the whales some space and headed further out. Guided by Gannets once again, we soon encountered another feeding group of Minke Whales, this time about eight. The whales surfaced noisily around us, to the delight of all on board.

We carried on our search - Ian Boustead who was conducting the survey (as part of the Yorkshire Wildlife Trust/Seawatch Foundation Yorkshire Cetacean project), totted up our whale count and stated we had seen at least 20 individuals. Brilliant! 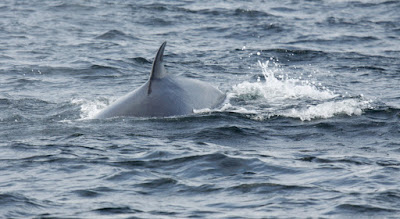 Sometimes, they came right alongside!


The sea got up by lunchtime along with some rain and wind, so we headed inshore to look for Harbour Porpoises and birds. It was disappointingly quiet close to the cliffs, but our exhilaration and Sean's lemon drizzle cake kept us going. Things calmed down by 2pm, so we went back out to about five miles and saw a handful more Minkes and a few Bonxies including a close bird sitting on the sea. Time was getting on, so we headed in, covered in smiles and salty sea. 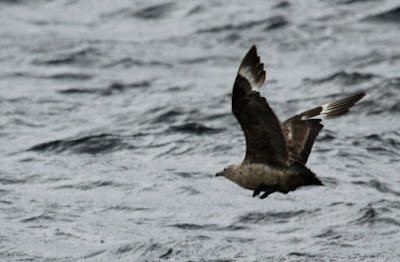 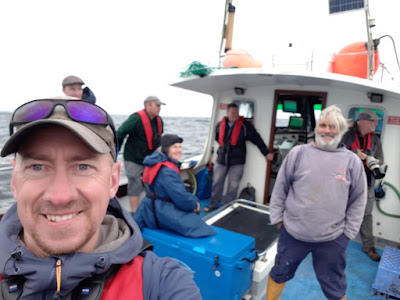 Happy Days on All My Sons!