It was one of those days of near misses. We'd tried hard in our usual spots around northeast Unst and found very little. A fly-by wagtail near the Balta Light bar called just like a Citrine, but without ground views we couldn't rule out a (much rarer) Eastern Yellow Wag. To our dismay, the bird disappeared into the distance. We tried to relocate it at Haroldswick but drew a blank, although a Jack Snipe was enjoyable as it flew around the area. Earlier, the lads had had a ticking bunting fly over at Norwick which didn't stop either. Sometimes the birding gods are against you...We headed down to Baltasound and popped into the walled garden behind the Health Centre. 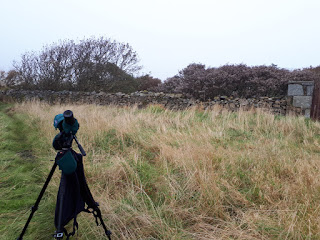 Just outside the walled garden

This spot had a great vibe about it and to our delight as soon as we walked through the gate, Mark picked up a large warbler in one of the Sycamores. It moved quickly into thicker cover, but I managed to get on it as it made it's way along the wall top. It had long undertail coverts- an 'Acro' (Acrocephalus warbler eg Reed, Marsh etc) and was holding it's tail slightly cocked and wings drooped. This looked good for Blyth's Reed!

At that moment, another birder came into the garden - Allan Conlin - who said he had been watching the bird for a couple of hours prior to our arrival and had left to put the news out as he didn't have signal in the garden! Allan thought it was a Blyth's Reed Warbler -confirming our hunch. He was, however, a bit concerned by the number of primary tips that were visible. There should be six or seven, but on his excellent photo (see below) you can clearly see eight and they seemed a bit pale-tipped -hinting at Marsh Warbler. The bird's banana-shaped jizz (tail up, short wings drooped), overall colouration, distinctly plain tertials (without obvious dark centres), short primary projection, the short supercilium, long bill and lack of yellow feet clearly pointed to Blyth's Reed however. We puzzled over the Marsh-like pale tips and scrutinised the pictures while we kept several eyes on the bushes for another view. Allan had also heard the bird's distinctive 'tak' call. Then, Brydon Thomason rocked up and said he'd had the bird yesterday but hadn't had time to pin it down. So, the bird had been found independently three times! Scenes.

Shortly, the bird popped up on the boundary wall and showed fantastically up in a bare bush, before flicking on to another wall where Mark managed a record shot. It then dropped into the nettles and vanished, leaving us to celebrate the clinching views. Back in the garden, a Red-breasted Flycatcher was much more showy, zipping around in the low branches of the Sycamores, occasionally alighting on the grass. A couple of Bramblings and Yellow-browed Warblers were also kicking about. 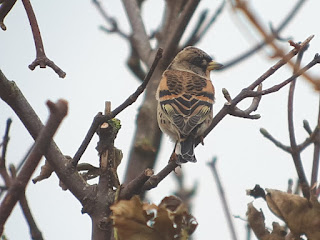 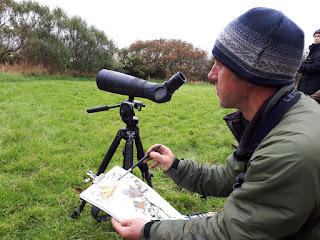 Brambling, top, with Darren getting his RB Fly on in the garden.