Wheldrake Ings is very flooded! Donning the chest waders, I paddled into the flood at the bottom of the lane, only to discover the right boot had a leak, so my foot was soon bathed in icy river water. Great. Not a problem, I was carrying my wellies and spare socks, so stumbling on to the bridge, I changed foot attire and warmed my numb toes. 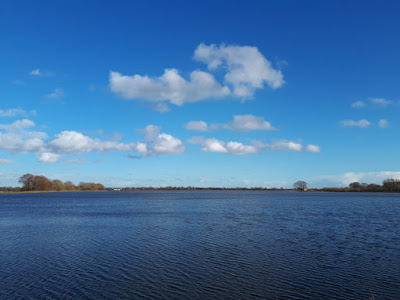 The ings looked like a lake, holding a huge quantity of floodwater. A few grassy strips were crowded with Curlews and Wigeon, with ten Black-tailed Godwits and a pair of Pintails on another. In the distance, the gulls were gathering, so I sploshed on. A large stretch of the track was in active flood, with water flowing freely across on to the meadow. After a bit, and with wet jeans, I arrived at Tower Hide. 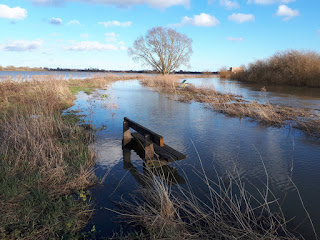 The riverside track, looking not too unlike the River Derwent to it's right! 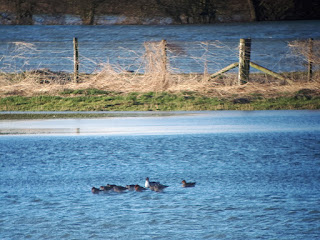 The gulls were pouring in, but sadly onto Swantail Ings, so in the strong wind, were quite tricky at the distance. Nevertheless, a fine first-winter Iceland Gull dropped in after a bit of a fly around. 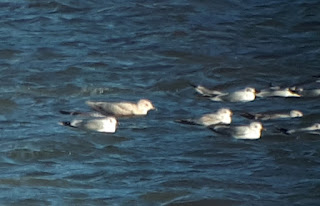 Above: Iceland Gull. Note the pale bill with black sub-terminal band and pale tip, unlike the later bird.

After a while, the pale ghost headed off down the valley with other large gulls. Next up, a fine first-winter Caspian Gull appeared in the roost. After watching it from afar it took off and to my delight, settled much closer.

Shortly, an adult Mediterranean Gull dropped in with the distant flock on Swantail - see below.


Adam joined me in the hide. I picked up two further Med Gulls; an adult with a full black hood - see below, and a third bird with half a hood, somewhere between the two others. The Iceland Gull reappeared, this time much closer. It wasn't until sorting my videos that I realised that this was a different bird, with a much darker bill and more coarsely-marked plumage. A possible third-winter Yellow-legged Gull appeared, though refused to reveal it's wings. Three Lesser Black-backed Gulls, including a displaying pair, hinted at spring as did the distant bubbling songs of Curlews drifting across from the Low Grounds.

I did a headcount of large gulls: 205 Great Black-backed Gulls, 420 Herring Gulls. I also estimated 5,000 Common Gulls and about 10,000 Black-headed Gulls. Six Pochards and c100 Pintails were the only other birds of note. We paddled back through the floods, giving my right foot another icy dousing, but headed home very happy with our Leap Day gull haul.

Below: Med Gull #2, with full black hood. An interesting-looking first-winter gull floats past at the front, hinting at Bonaparte's, with a nice grey shawl, small dark bill...shame I didn't notice that in the field!