Saturday morning. The weather had changed to a slight murk with a light easterly. The kind of conditions that would send me scurrying to Wheldrake Ings or maybe Flamborough Head, full of anticipation for some top spring birding. But not this year. The current reality is that I, like everybody else, is birding close to home due to Lockdown restrictions. Several York birders had jammed in on some quality spring migrants over the past few weeks; Ring Ouzel, Redstart, Osprey, even a White-tailed Eagle (!), but I had had to make do with some quality Wheatears, Yellow Wags and Little Owls. Nothing to set the pulse racing too much, but enjoyable nonetheless.

I decided to cycle out to the south of the village to check some fields and rough grassland for migrants. Maybe a Ring Ouzel or a Whinchat would turn up. Fingers crossed. I checked the pea field just south of Bishopthorope: no Dotterels, but an Oystercatcher was nice. Just down the road two Swallows sat on the wires and I stopped underneath and took a pic with my phone. Gorgeous birds. A little further on and I noticed a bunch of hirundines flying low over the camping field and ditch next to the road. There was a few House Martins among them, so I stopped for a look. Several were sitting on the telegraph wires including some martins, so I got my scope out for a look. Then, a Red-rumped Swallow flew low over the grass right in front of me, showing off a shiny blue back, peachy collar and orangey rump. WHAAATTT????!!!!!

Surely not, this is Acaster Malbis, not Flamborough! It banked round and I saw the peachy underparts, pale throat and 'stuck on' long black tail. Holy Crap! A massive adrenaline surge nearly knocked me off my feet and a thousand thoughts rushed through my head - could I release the news? Would I be in trouble for encouraging a twitch? What if it flew off without me managing to get a pic? Anyway, I could see that some of the flock were still sitting on the wires, so I rapidly set my scope up on them in the hope it would land. About forty Swallows, House and Sand Martins lined the wires. The Red-rump continued to cruise around low over the turf in front of me - was this really happening? I was shaking and my head was spinning. Calm down, lad!

I put the news out locally and Chris Gomersall who lives nearby said he was on his way. I tried to get a handheld phone video of it - my only option unless it decided to land on the wires. I didn't know whether the phone with its tiny zoom would pick it up, but it did:

Apologies for the commentary - given to myself! 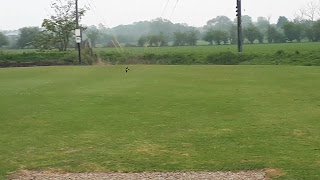 Here is a grab from that clip.

After a few minutes and to my delight, the bird then settled on the wires and I managed a first bit of phonescoped video. Relief! What a stunner! It had really long tail streamers, so presumably a male. Within moments, Chris arrived and to my relief the bird was still sitting on the wire allowing Chris to get straight on it. Boom!


The bird preened frequently, between bouts of feeding, where it did a low circuit of the camping field, the nearby sheep field and the ditch. Keeping our social distance (!) we moved to a better position where we could get closer views when it came back to perch.


The last time it perched, it sat further along the wires with the trees behind, giving us more colour. Superb! 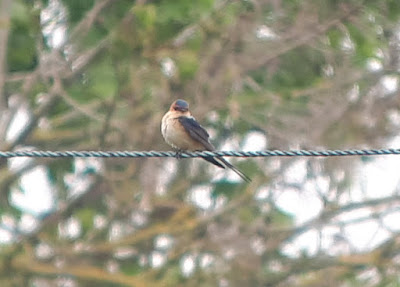 This was the last time it settled. On taking flight, the flock of c40 hirundines gained some height over the Ship Inn car park. The RRS was easy to pick out, with more languid flight and big long forked tail. It glided round in lazy circles among the more frenetic martins. Chris drew my attention to a Common Swift that had joined the throng, my first of the year! A Sparrowhawk cruised through a few minutes later - perhaps why they were nervous. All of a sudden, about 10.40am, the flock disappeared, leaving no trace of the Red-rump or any of its gang. I didn't see it again.

Red-rumped Swallow is a bird I have always looked for in April in flocks of hirundines but never found. To find one anywhere would be a treat but within a mile of my house is just amazing and feels like a dream. In any other circumstances, I would be elsewhere, but this just shows what local patching can deliver. 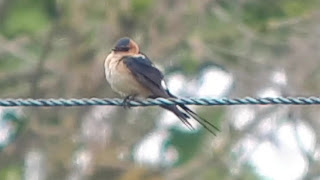 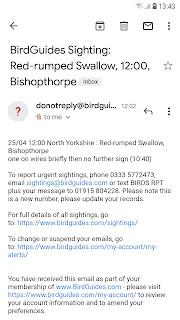 If accepted by the YNU, this will be the fourth record for the York recording area, the last being one seen briefly by Andy Walker at Heslington East in May 2013 - see here.

The previous accepted records are:
A bird at Healaugh on 7th May 1974 was just outside the York recording area.

In other news, besides the RRS and Swift, I had ten House Martins, ten Sand Martins, 20 Swallows, three Yellow Wagtails, c50 Fieldfares and several Whitethroats. Local birding ain't too bad! 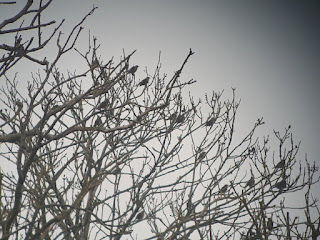