Walking the dog first thing, I got a message from Paul Doherty about a Red-footed Falcon in the southeast of the York recording area. He said that a photographer, Craig Storton, had been told by a farmer about a 'falcon with a white head' at Biggin near Sherburn-in-Elmet. Craig checked it out yesterday evening, discovering a stunning Red-foot. Craig had seen the bird on the wires near the village but lost it as it flew off to the north late on. I decided to go and have a look before work, as it is always worth checking these things out and I had a hunch that it wouldn't have gone far at that time of night.

The weather was against me, as mist and low cloud meant viewing was difficult. I drove slowly round the lanes near Biggin, stopping to check the wires every so often. No Red-foots and not even a Kestrel, just a few bemused looking Wood Pigeons, an odd Carrion Crow and a few Magpies. I decided I best get home and rang Paul to let him know there was no sign. I thought I should do one more check of the area where Craig had seen the bird and pulled in at a layby on the Cawood to Sherburn road just west of Biggin. A large raptor circling low over the fields to the south drew my attention, so I hopped out of the car with my bins - Red Kite. Check the wires, uh oh! Hunched falcon, with long wings...looks interesting! Very quick assembling of scope and KAPOW! Female Red-foot! The pale head and breast stood out a mile, which was fortunate as it was about a mile away. I threw my scope in the car and shot down to the farm track leading to the kennels. A few minutes later and in my scope was the most stunning first-summer female Red-footed Falcon! 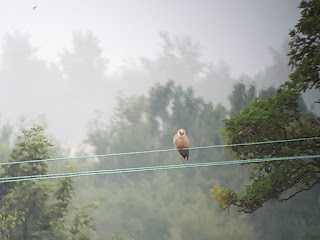 Falcon in the mist!


Absolutely mindblowing. I then noticed a car with a massive camera lens poking out of it - I waved, the guy drove up - it was Craig! Big socially distant hugs and high fives. I love the way the excitement of wildlife can bring complete strangers together in this way. I got the news out and then drank in this cracking little falcon. It hunted, shrike-like from the wires, dropping into the field to catch beetles, always returning to the wires. It was totally unconcerned by our presence and flew closer to us, showing beautifully. 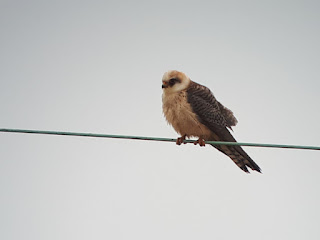 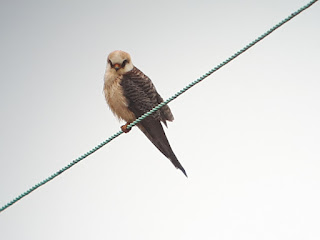 Three short videos of her eminence.

Red-foots are such quality birds and I have struggled to catch up with one in the York area. This is probably the third one this spring, with two brief birds seen in the LDV, but this one was definitely worth the wait. Craig and me, beaming like Cheshire cats, enjoyed the moment before a few local birders began to arrive and I decided I better head off to work. The bird showed well until 10.45 when, after having bashed up the local Kestrel, decided to fly off northeast. It wasn't seen for the rest of the day.

I decided to head out after tea, to see if I could refind it, but sadly, despite driving round the local area for a couple of hours checking the wires, dead trees, fences, etc, it failed to reappear. Where will it turn up next? Big thanks to Paul for passing on the news and to Craig for following up the farmer's report. 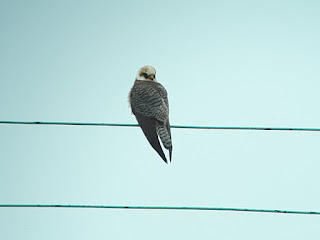 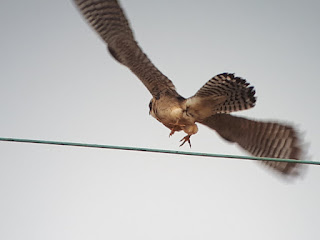 My last pic of the bird as it flew off the wires. Awesome!