Things that go Kwek in the night 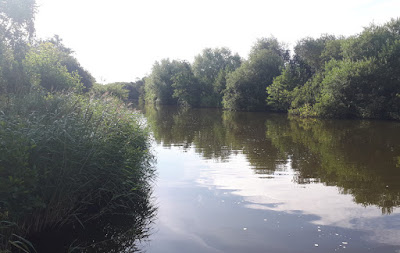 After a tough and stressful year so far, four nights on a boat on the Norfolk Broads with the family and best mate Philip, seemed a perfect antidote. We picked up a boat in Stalham and sailed south down the River Ant to Irstead. We moored for the night by the river side south of the village, next to a large marshy wilderness. A Grasshopper Warbler reeled unseen in the marsh and Reed Warblers slunk through the reed stems. Darkness fell, and after a long day, we turned in for the night.

Through my doze, a sudden bird call brought me to my senses. What was that? The Grasshopper Warbler continued to reel, but beyond that, the night was quiet.
Then again, a little closer, a series of 'kweks' speeding up to a rapid crescendo. And then again. My mind whirred- I'd heard this before. Surely, a Little Crake! I sat up in bed as the bird called again; my wife asked what I was doing - 'I think there's a Little Crake calling!' was my response.
I scrambled for my phone in the dark, knowing I should try and record the bird - it was switched off -damn! The bird called again - I couldn't believe this was happening - I noticed the time as my phone came to life - 11.45pm. Ready for action, I now waited, breathless, sitting in the dark, ears straining. But that was it. As suddenly as it had started, it went quiet.
Silence descended on the marsh, save the continual reeling of the Grasshopper Warbler. I strained my ears for calls. By 1am, and despite the adrenaline, I couldn't stay awake, and sleep took me.

The following morning, I told my mate Philip who had slept through the event in his cabin. He hadn't heard it and was understandably incredulous and a bit annoyed that I hadn't woken him. I went straight out on deck with my phone and tried some playback to attempt to elicit a response. Nothing. I decided to put the news out on Twitter, in case local birders wanted to check it out. It was a tricky place to get to without a boat - we had moored up at a random spot by the river. No paths were apparent. 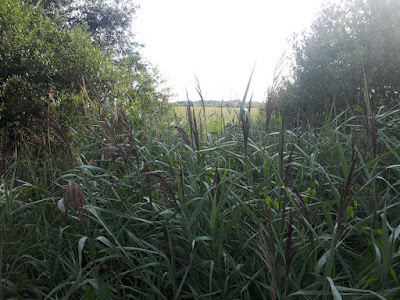 During the day, I replayed the event in my mind over and over, and tested my memory of what I had heard. Doubt began to seep into my mind, like a mist creeping up the edge of a river at dusk. I pushed this back - I know what Little Crakes sound like. I have prepped for years, as along with Baillon's Crake, it is one of those birds I always hoped to stumble across at Wheldrake Ings on a spring evening. I had even heard them before in Europe, and once in Britain - a calling male in Kent, 20 years ago.
Nevertheless, doubt began to creep in. Why hadn't I jumped out of bed and woken my mate Philip - it was a Little Crake for God's sake! Had I imagined the whole thing in a dream? Was it really a Little Crake, or had a Water Rail or something else calling weirdly fooled me? These doubts lingered with me all week. On return to York and good internet, I trawled through Xeno Canto to see if I could find a Water Rail sounding like the bird I had heard. I couldn't, yet the recordings of Little Crake sounded spot on. This wasn't a surprise; I hear Water Rails all the time, making all sorts of noises, from flight calls at night, to pipping males, singing unseen in the reedbeds at Wheldrake.

So, what to do? Without a sound recording or corroboration, acceptance of this record would come down to whether a records committee would believe my story and my ability to identify a bird of this rarity from a brief and unexpected hearing. I will submit the record of course, as I trust my instincts and ears, but I doubt the bird will be accepted. Nevertheless, an exciting and unexpected experience in the depths of a wonderful wetland that will remain with me. 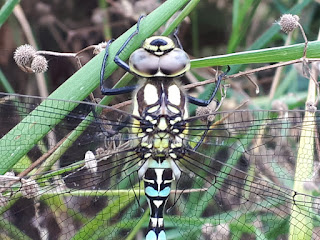 Southern Hawker
...
The rest of our week was lovely. Highlights included two Otters (both on the Ant), a fly-by Great Egret near Horning Hall on 23rd July, a couple of brief Norfolk Hawkers, three reeling Grasshopper Warblers, Marsh Harriers etc. Fab stuff and nice to be back in my old patch.
at July 30, 2020