With a North-easter blowing and the threat of rain, I mistakenly headed for the Old Fall Oasis first, rather than the cliffs. A super-rare-looking Garden Warbler flitted down the hedgerow, but eventually perched briefly allowing me to abandon my wild optimism. Otherwise, three Lesser Whitethroats in the Golf Course Willows, a few Willow Warblers and several Whitethroats was all I could muster. Not even a sniff of a Pied Flycatcher, let alone an Icterine or Barred Warbler. 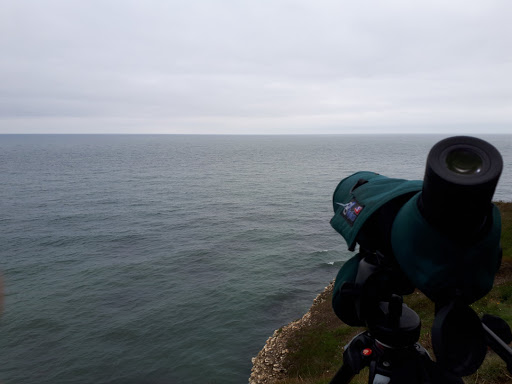 On to the cliffs I went, where I discovered all the real birders were seawatching, not wasting their time bush-bashing! Fortunately, despite a good skua passage so far, more were to come and within the next couple of hours I saw at least five Long-tailed Skuas sprinting north, c15 Arctic Skuas, a trio of ponderous Great Skuas and possibly the highlight (because I love 'em!) a superb dark morph adult Pomarine Skua, cruising south menacingly, complete with full cutlery set. 'Also-rans' included a smart second summer Little Gull, juv Mediterrean Gull, hordes of terns including some gorgeous juvenile Arctics, c15 Manx Shearwaters, a few Common Scoters and some waders heading south. Also, at least five Harbour Porpoises.